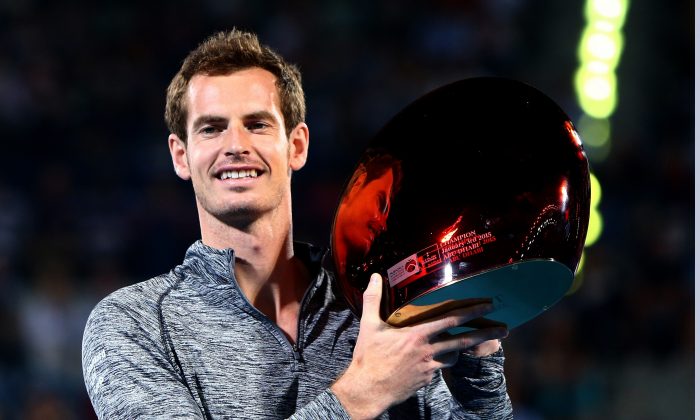 Scottish tennis player Andy Murray poses with the trophy of the Mubadala World Tennis Championship after winning the competition following the withdrawal of Serbian player Novak Djokovic from the final due to illness in Abu Dhabi, on January 3, 2015. (Marwan Naamani/AFP/Getty Images)
HK Sports

Andy Murray gets 2015 off to a winning start as Novak Djokovic pulls out of the Final of the Abu Dhabi Mubadala World Tennis Championship on Saturday Jan 3, 2015 due to illness. Both players seemed in good form on Friday Jan 2 in their Semi-final matches with Djokovic beating Stan Wawrinka 6-2, 6-1 and Murray winning 6-3, 6-0 against Rafael Nadal. But Djokovic said he was ill and unfit to play the Final. Feliciano Lopez and Nicolas Almagro played an exhibition match instead.

Just six of the world’s top players took part in this 3-day opening tournament easing themselves into the new-year from Jan 1–3, 2015. The two top seeds Djokovic and Nadal were handed byes in the first round of this non ATP knock-out event leaving the other four players Murray, Lopez, Wawrinka and Almagro to fight it out for semi final places.

Murray came through a tough opening match against Lopez 7-6 (7/1), 5-7, 6-4 while Wawrinka outplayed Almagro 6-3, 6-2 to produce a Semi-final lineup of Murray against Nadal and Wawrinka against Djokovic. Murray overcame a still rusty Nadal just back from an appendix operation 6-3, 6-2 and Djokovic beat Wawrinka in two straight sets 6-1, 6-2. Murray’s Semi-final match was not as easy as the score suggests, there were long penetrating rallies and points could have gone either way but Murray just had the edge on important points.

Following this year opener, all of the top players will descend on Australia to begin their warm-ups for the first major of the year, the Australian Open, which starts in Melbourne on Jan 19, 2015.

Andy Murray now flies to Perth, Australia to take part in the Hopman Cup representing Great Britain partnered by Heather Watson. This long established international mixed pairs competition is being held at the Perth Arena from Jan 4-10, 2015. Teams from Canada, Czech Republic, Italy and United States are in Group-A; and Australia, France, Great Britain, and Poland make up Group-B. Matches consist of Men’s and Women’s singles matches and a mixed doubles decider. The other teams comprise: Serena Williams and John Isner for the United States; Eugenie Bouchard and Vasek Pospisil for Canada; Casey Dellacqua and Matt Ebden for Australia; Alize Cornet and Benoit Paire for France; Agnieszka Radwanska and Jerzy Janowicz for Poland; Lucie Safarova and Adam Pavlasek for Czech Republic, and Flavia Pennetta and Fabio Fognini for Italy.

Women’s WTA
The road to Singapore 2015 officially starts this week (Jan 5) with 3-tournaments in different countries in Asia-Pacific; the Shenzhen Open in China, The Brisbane International in Australia and the ASB Classic in Auckland, New Zealand, these will be followed by the Australian Open later this month.