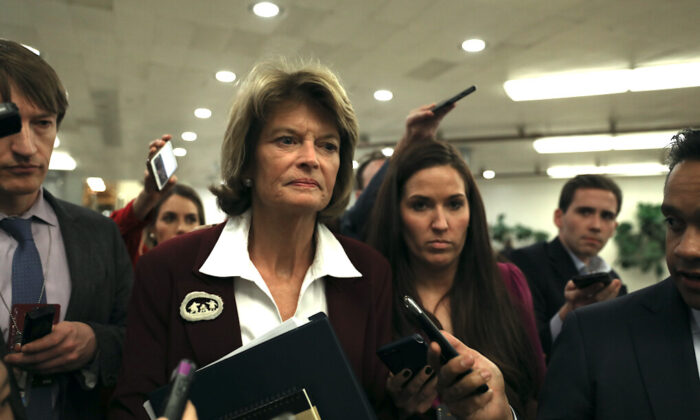 Sen. Lisa Murkowski (R-Alaska) walks through the Senate subway area during a break in impeachment proceedings, in the Capitol in Washington on Jan. 28, 2020. (Charlotte Cuthbertson/The Epoch Times)
By Isabel van Brugen

Sen. Lisa Murkowski (R-Alaska), considered a possible swing vote in the impeachment trial of President Donald Trump, said Feb. 3 that she “cannot vote to convict” the president, while calling the foundation of the inquiry process “rotten.”

Ahead of a vote on whether to convict or acquit Trump on Feb. 5, Murkowski told the Senate floor on Feb. 3 that while she believed the president’s actions were “shameful and wrong,” removing Trump from office would be “the political death penalty.”

“I cannot vote to convict,” she said. “The constitution provides for impeachment, but does not demand it in all instances.”

Murkowski had previously been considered a possible vote against the acquittal of the president. However, she criticized the House investigation as rushed “simply to meet an artificial, self-imposed deadline.”

Voicing her frustration over the House and Senate’s handling of the impeachment inquiry, she referred to the impeachment trial of Bill Clinton in 1999, which she described as a fair, honest, and transparent process. Prior presidential impeachments—unlike Trump’s—she said, resulted from years of investigation.

Meanwhile, she said, members who were present during the Clinton trial took the exact opposite stance from their stance today. “That level of hypocrisy is astounding, even for a place like Washington, D.C.,” she said.

“The House failed in its responsibilities. And the Senate should be ashamed by the rank partisanship that has been on display here.

“We cannot be the greatest deliberative body when we kick things off by issuing letters to the media instead of coming together to set the parameters of the trial and negotiate in good faith on how we should proceed.

“And for all the talk of impartiality, it is clear to me that few in this chamber approached this with a genuinely open mind.”

Murkowski added that she made up her mind not to convict Trump after several days of deliberation over the “rotted foundation of the process.”

“All of this led to the conclusion … that there would be no fair trial. While this trial was held here in this Senate, it was really litigated in the court of public opinion.

“What started with political initiatives that degraded the office of the president and left the Congress wallowing in partisan mud, threatened to drag the last remaining branch of government down along with us.”

She said, however, that Trump shouldn’t place his personal interests above “those of this great nation.”

“The president has the responsibility to uphold the integrity and the honor of the office. Not just for himself, but for all future presidents. Degrading the office by actions, or even name-calling, weakens it for future presidents, and it weakens our country.”

Murkowski said that the response to the president’s behavior shouldn’t be to “disenfranchise nearly 63 million Americans” and remove him from the ballot.

“The House could have pursued censure and not immediately jumped to the remedy of last resort,” she said, adding that voters should decide Trump’s fate.

“The voters will pronounce a verdict in nine months. We must trust their judgment.”