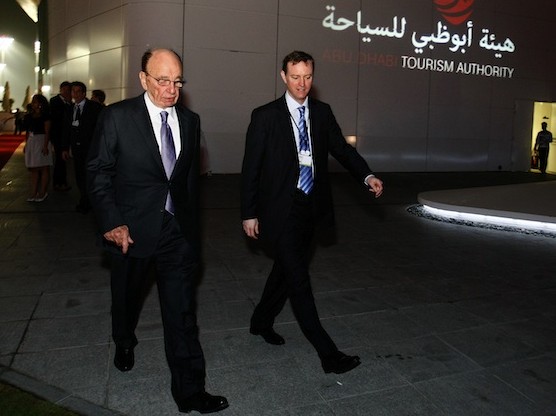 Multi-media magnate Rupert Murdoch and his son James will appear before the Leveson Inquiry in London this week to answer questions about phone-hacking and their responsibility in the practice in the papers they ran.

The News of the World Sunday newspaper is the main publication being investigated. It was closed in July 2011 to prevent losses to the Murdoch’s News Corp organization reported to be worth near $50 billion.

Rupert Murdock is seen by close observers to have a knack for parrying uncomfortable or damaging questions away from himself and his assets.

When Rupert Murdoch was being questioned by the Parliament Culture, Media and Sports Select Committee hearing last summer, he acknowledged having visited three Prime Ministers at 10 Downing St. “I wish they would leave me alone,” he quipped.

But such parries, often delivered with a smile, are wearing thin.

Over 40 people have been arrested in connection with News Corp, phone hacking, and police retainers or bribes.

James Murdoch will be questioned on Tuesday, and a full two days have been cleared for Rupert Murdoch’s testimony on Wednesday and Thursday.

Although he will try to convince the inquiry of his righteous 40-year career in the news business, a good deal of the senior Murdoch’s enterprises during that time are under investigation.

His son also will also want to polish his nameplate as his appearances before the select committee have matched poorly with subsequent submissions.

David Cameron and Tony Blair will answer questions from the seven lawyers of the Inquiry later this year.