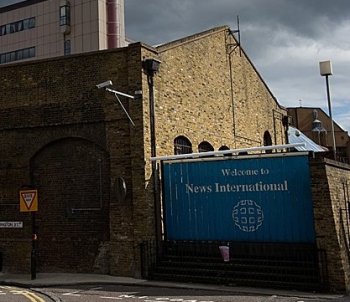 News International's site in Wapping is pictured in east London, on September 5. Rupert Murdoch, chairman and CEO of New York-based News Corp., finds himself at the center of his own ever-widening scandal; one that threatens his hold on the $40 billion global media empire he started. (LEON NEAL/AFP/Getty Images)
Business & Markets

Heide B. Malhotra
View profile
Follow
biggersmaller
Print
The phone-hacking scandal, perpetrated by one of the Murdoch empire’s subsidiaries, has fascinated the British public and the investigation by the British Culture, Media, and Sport Committee, which is under the auspices of the British Parliament, published its latest findings on Sept. 6.

The evidence under scrutiny was correspondences discussing the illegal activities committed by staff at Murdoch’s former tabloid, The News of the World, and makes for mundane reading.

Nothing really new that would make headlines came out of the Sept. 6 hearing. It’s all about who said what and who did what and who had been privy to certain email traffic a few years ago.

“This is a further follow-up session for the committee’s inquiry into press standards, privacy, and libel where we are continuing to examine, specifically, the illegal activities that took [place] at the News of the World several years ago,” said John Whittingdale, chair, when opening the proceedings.

“In the journalist’s profession the end does not justify the means; therefore information must be obtained by legal and ethical means,” said The Council of Europe in its Resolution 1003, which addresses journalistic ethics.

Apparently, having completely ignored Resolution 1003, journalists and management of The News of the World tried to skirt legal and ethical ramifications by hiring nonjournalists to hack phones. Nonjournalists did not have to abide by the journalistic code of ethics.

Hiring outsiders, “gave them the freedom to obey norms different from those of their employers,” said Michel Anteby, professor at Harvard Business School, in an article published by the school’s publishing arm.

Murdoch, during testimony before the Culture, Media, and Sport Committee at Parliament’s House of Commons, said that the firm had hired private investigators, but they were only involved in legal activities.

The Murdoch empire has been talked about for years, reaching unprecedented heights with the disclosure that the newspaper got its stories through illicit means, by tapping phones of public and well-known figures.

According to newspaper reports, prominent people took the paper to court for a number of years, claiming that its staff illegally listened to cellphone messages. What finally broke the camel’s back was the admission that the paper tinkered with the voicemail of a girl that had been murdered, hampering the police investigation.

The British public finally had had enough with Murdoch’s antisocial machinations and the scandal was laid, in the mind of the British, squarely in front of Rupert Murdoch’s door.

Advertisements were the next to go, with Ford Motor Co. the first to officially announce the cancellation of its advertising contract. Other major advertisers also got cold feet, including Sainsbury’s Supermarkets Ltd.

Finally, the embattled The News of the World was closed down after the last issue on Sunday, July 10, 2011, after having been one of Britain’s most popular tabloids since 1843, a total of 168 years.

Academia suggests that generally those in the driver’s seat make sure to keep their hands clean and let a subordinate take the fall. Well, almost always.

“Murdoch is the latest in a series of CEOs who become the story when their companies are caught in scandals, because their rise has been accompanied by shoving, bullying, and disdain for the concerns of others. Each act of indignity lengthens the line of offended parties who are eager to join the vigilante squad seeking punishment for the moguls,” according to an article on The Harvard University publishing arm, Working Knowledge.

“Recent allegations of phone hacking and making payments to police with respect to The News of the World are deplorable and unacceptable. I have made clear that our company must fully and proactively cooperate with the police in all investigations,” said Rupert Murdoch, chairman and chief executive officer of News Corporation in a July press release.

Murdoch affirmed in the same press release his support for Rebekah Brooks, CEO, who had been with the corporation for 22 years. However within a short time, in mid-July, he announced the resignation of Brooks and replaced her with Tom Mockridge, a former CEO of Sky Italia.

To save his empire, Murdoch asked for forgiveness from everyone around him in a prepared statement before the British Culture, Media, and Sport Select Committee of the U.K. Parliament.

“I would like all the victims of phone hacking to know how completely and deeply sorry I am. Apologizing cannot take back what has happened. Still, I want them to know the depth of my regret for the horrible invasions into their lives,” said Murdoch in his statement published on the News Corporation website.

A number of executives left the company and on Sept. 2 Murdoch refused to accept his annual bonus in an effort to placate the world and possibly its shareholders. But, he wasn’t quite as contrite as expected, as he left the door slightly open for being awarded a bonus at a later date.

“I have declined the bonus that the company chose to award to me. … I will consult with the Compensation Committee in the future about whether any bonus may be appropriate at a later date,” said Murdoch in the recent press release.

Building a Fortune on Scandals

“Rupert Murdoch, chairman and CEO of New York-based News Corp., has built a fortune on the scandals of others. Now, at age 80, Murdoch finds himself at the center of his own ever-widening scandal; one that threatens his hold on the $40 billion global media empire he started building in Perth, Australia, a half-century ago,” according to academia in an article on Knowledge@Wharton (KW).

Murdoch’s hardnosed, uncompromising, and aggressive business style helped him make many enemies. Academia suggests that Murdoch wanted to conquer and control those around him, as well as public and societal figures.

British Prime Minister David Cameron was drawn into the scandal for many reasons. Not in his favor is the hiring of one of News Corp.’s executives as communications director, an individual that was arrested and faces criminal charges.

As a result, Britain’s political establishment is looking inward and the most likely outcome will be reform that puts to rest many abuses by Britain’s media.

"They [Britain’s politicians] are quite pleased at the prospect … that they would no longer be slaves to Murdoch in the way they were. … But this basic cynicism that rules don’t apply to journalists—that it’s just a dirty game—will go. I think the casualness about ethics will go, which is very healthy. It’s a big cultural change for British journalism," said Brian Cathcart, professor at Kingston University in London, in the KW article.