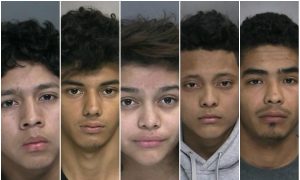 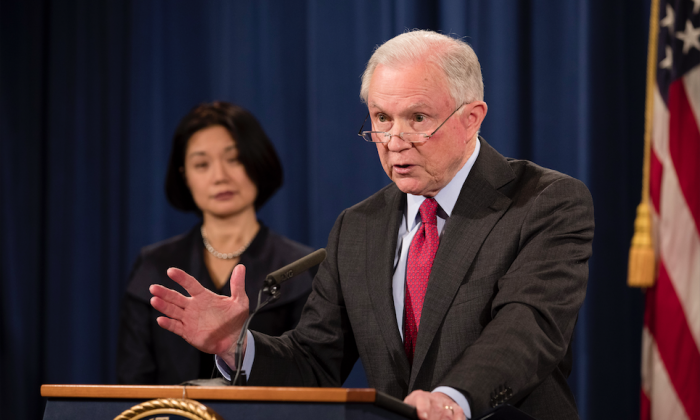 Attorney General Jeff Sessions (R) and U.S. Attorney Jessie K. Liu for the District of Columbia at a press conference at the Justice Department in Washington on Dec. 15, 2017. (Samira Bouaou/The Epoch Times)
Crime and Incidents

WASHINGTON—The violent crime rate increased by almost 7 percent nationwide from 2014 to 2016, according to new FBI statistics.

The murder numbers are the starkest, showing an increase of more than 20 percent over the same time period. Rapes increased by almost 11 percent; robberies went up 3 percent; and aggravated assaults jumped nearly 10 percent.

“These are not just numbers—these are moms, dads, daughters, spouses, friends, and neighbors,” Attorney General Jeff Sessions said at a press conference on Dec. 15. “These are empty places at Christmas dinner tables and holes in the hearts and souls of victims’ families that will never heal.”

A study funded by the Justice Department found that nearly a quarter of the increase in homicides was due to an expansion in illicit drug markets brought about by the heroin and synthetic opioid epidemic.

The study compares a similar increase in violence during the crack cocaine epidemic in the 1980s.

“The current drug epidemic is disproportionately concentrated in the white population, and homicides have increased among whites as well as among African Americans and Hispanics,” states the study, conducted by the National Institute of Justice. “We surmise, therefore, that the drug epidemic may have had an especially strong influence on the rise in homicide rates among whites.”

If we want to bring down violent crime, then we must stand up for our police.
— President Donald Trump

Although the study cited de-policing as a possible factor for the rise in homicides, it said evidence was “mixed at best.”

Following widely publicized deadly encounters between the police and African-Americans, concerns have emerged over increased police-community tensions and reductions in proactive policing.

The study cites a similar phenomenon during the widespread civil unrest of the 1960s.

Increases in homicides followed decreases in arrests in Baltimore and Chicago, according to the study. But it is not known if the same was true in other cities.

“In 2015 and 2016, we witnessed the steepest two-year consecutive increase in murders in nearly half a century,” said President Donald Trump in Quantico, Virginia, on Dec. 15.

The cities with the highest increase in murders in 2016 were Chicago (267 more in 2016 than in the previous year), Memphis, San Antonio, Louisville, and Dallas.

Trump, speaking to the FBI, offered his full backing to law enforcement.

“If we want to bring down violent crime, then we must stand up for our police,” he said. “Instead of holding up our police as the role models and mentors they are, they have been subjected to malicious attacks on their character and integrity. This anti-police sentiment is wrong, and it’s dangerous, and we will not stand for it.

“Most concerning of all, we have seen an alarming increase in violent assaults carried out against our police officers.”

Trump said that last year, an officer was assaulted every 10 minutes on average, and more than 140 officers lost their lives in the line of duty.

“Now, more than ever, we must support the men and women in blue,” he said.

Sessions announced the deployment of 40 additional violent crime prosecutors to help fight the surge in crime.

“These prosecutors are being sent to hotbeds such as Central Islip, New York, where we will have two new federal prosecutors focusing solely on violent crime there and MS-13,” Sessions said. “And each of our southwest border districts will receive additional prosecutors to focus on the cartels and the violence and illegality that infects that region.”

Sessions said another 260 prosecutors will be deployed in the months to come.

He says a reinvigorated and properly funded Project Safe Neighborhoods program, led by the prosecutors, will help reduce violent crime. The program, started in 2001, provides local and state task forces with extra tools and information-sharing to target gun and gang crime.

“This is the centerpiece of our crime reduction strategy,” Sessions said of the program, in October.

“Taking what we have learned since the program began in 2001, we have updated it and enhanced it, emphasizing the role of our U.S. attorneys, the promise of new technologies, and above all, partnership with local communities,” he said. “With these changes, I believe that this program will be more effective than ever and help us fulfill our mission to make America safer.”

Sessions said the 2017 crime statistics are not available yet and wouldn’t comment on whether the violent crime trend is continuing upwards.

Correction: This article was updated on Dec. 22. The 20 percent jump in murders was over a two-year period (from 2014 through 2016), not just one year. The Epoch Times regrets the error.