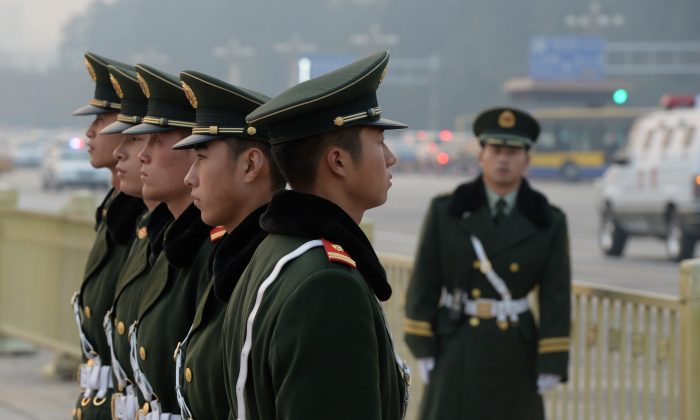 Chinese para-military police stand guard in Beijing on Nov. 8, 2013. The Ministry of Public Security turned the investigation of a murder in Shandong Province into an anti-cult campaign, the likes of which had not been seen for ten years in China. (Mark Ralston/AFP/Getty Images)
Falun Gong

First the authorities tried to downplay the murder. Then they played it up. In the end, the Chinese people were only reminded of the high cost of justice in China.

On May 31, a video clip showing one man, four women, and a boy beating a woman to death in a McDonald’s restaurant went viral in China. The murder had occurred on May 28 in Zhaoyuan City, in eastern China’s Shandong Province.

On May 29, the Zhaoyuan police posted a brief description of the case on its official microblog. The words “argument,” “beating,” “injured,” and “failed to save her” were used even though there was no argument, and the victim died right on spot. The full names of the suspects and the victim were not mentioned.

On May 31, after the video appeared, the Zhaoyuan police posted another microblog. This time, the suspects became the members of a group called Church of Almighty God. They attacked and beat to death a woman who refused to give them her phone number, according to the microblog.

Even though the family of six suspected of the murder owned three cars, including a Porsche Cayenne that they drove to the McDonald’s that day, none of them had held a job in the past seven years, according to the police.

The main suspect, a man named Zhang Lidong, was trotted out by CCTV on May 31 in what has now become a common practice. The TV station exposes and humiliates suspects in public before any formal trial takes place.

Actually, the authorities stage the TV appearances so that the suspects can be shown saying whatever is needed. In this case, Zhang admitted being a member of the Church of Almighty God, being jobless, and having killed the woman for being a “devil.” These particulars add up to the Chinese Communist Party’s (CCP) portrait of what a “cult” member looks like.

Asked why the Zhaoyuan authorities took three days to publicize the case, the head of the Zhaoyuan CCP Propaganda Department explained that the case was first reported to the local provincial public security and then to the central Ministry of Public Security (MPS). The MPS decided the nature of the case, and the Propaganda Department said that the delay in going public was meant to avoid interference with solving it.

The suspect is rich and the owner of a gold mine. According to a netizen, the Zhaoyuan police chief is a good friend of the suspect. Even though this detail has not been confirmed, this version explains the Porsche and the initial, low-key manner of the first police announcement.

The local police first wanted to cover up the crime. When the MPS got involved, the religious issue appeared, and the case became more political than criminal.

Led by CCTV, the Chinese regime’s media mouthpieces started an anti-cult propaganda campaign the likes of which have not been seen in China for 10 years. On June 2, Legal Evening, one of the mouthpieces of the Beijing CCP Committee, listed 14 religious groups as “officially banned cult organizations.”

Netizens immediately noticed that Falun Gong, a spiritual practice based on the principles of truthfulness, compassion, and tolerance that has been persecuted in China for the past more than 14 years, was not on the list.

The famous human rights lawyer Jiang Tianyong posted to his Twitter account: “Falun Gong has been persecuted by the CCP on the pretense of being a cult for nearly 15 years. Numerous practitioners have been followed, detained, locked up, made to perform forced labor, jailed, and brainwashed. Yet, [Falun Gong] is not on the list of 14 so-called ‘cults.’ Where is the legal basis for so many years of cruel and bloody persecution?”

The list came from the internal secret document of the MPS in 2000 called the “Notice of MPS 2000 No. 39.” Out of the 14 organizations listed as “cults,” 7 were decided by the Office of CCP Central Committee and Office of State Council, and 7 were decided by MPS itself.

The secret document was exposed in 2002 by a New York-based Christian human rights group called “Committee for Investigation on Persecution of Religion in China.” (www.china21.org/English/index.htm)

Neither the Central Committee, nor the State Council, nor the MPS has the power or authority to draw up such a list. Not a single law nor anything in the Chinese Constitution authorizes these Party and State organs to label any group a “cult.”

Shocked by the netizens’ responses, someone made a “correction” the next day. Xinhuanet reported that a website “Kaiwind” quoted the Chinese Anti-Cult Association’s (CACA) list of 20 “active cults.” This time, Falun Gong was included.

The CCP established the CACA in 2000 to assist in the persecution of Falun Gong. Even though it takes orders directly from the central 610 Office—the office charged with “eradicating” Falun Gong—CACA officially claims to be an NGO.

The “Kaiwind” website doesn’t have any information on the owner, the host, or even the names of the authors of the original articles. Actually, the website is run by the central 610 Office, but this is a state secret.

How can a self-assigned “NGO” decide what organizations are cults and through an anonymous website, “correct” the mistake of the Party and State organs’ illegal decision? This is a sign of the weakness and power struggle in the top leadership.

Actually, the persecution of Falun Gong has been illegal from the beginning. For the first three months, it was based on two ministry-level department regulations made on July 22, 1999, two days after the persecution started.

Then, the MPS extended the “ban” to all Falun Gong-related activities and all Falun Gong practitioners. Both ministries had no jurisdiction to “ban” any organization. Besides, the “ban” also violated the Chinese Constitution, which promises freedom of religion.

Realizing that the claim by Jiang and People’s Daily still did not provide a legal basis for the persecution, the standing committee of the National People’s Congress hurriedly passed a decision to ban “heretical cults.” This “ban” also violated the Chinese Constitution, and no specific organization was mentioned.

Why do most Chinese people—and most Western media—believe that Falun Gong was banned in China? The regime’s massive barrage of hate propaganda confused the issue so that a CCP political campaign was mistaken for the rule of law.

Many netizens have asked why the bystanders didn’t help the woman. It’s not that people didn’t want to help. According to the police, they received at least 10 emergency calls reporting the beating.

One netizen named “Zhaocaijinbao” probably gave the best explanation for why the bystanders didn’t intervene: “If I really saved the woman, but injured the killer, I would definitely need to pay the penalty. The killer becomes the victim, and the good Samaritan becomes the suspect. If the suspect’s family has connections with Zhaoyuan’s powerful people, the consequences will be even more troublesome.”

This is the situation in China. In most cases of gangs beating innocent people in public, some Party or state officials are behind the crime. Many mass incidents—protests or riots of more than 50 people—are caused by the police protecting criminals who have connections or are themselves members of the regime.

For some people, taking a risk to save a life is worth doing. But to take a risk only to be framed by the police, or, worse, to be shot by the police and then framed, is another story. In the ordinary population, there is always someone willing to sacrifice him or herself for justice. But that’s not most people’s choice.

Where are these people now? Labor-rights and Tiananmen Square activist Li Wangyang was allegedly murdered by Hunan provincial authorities in 2012. Lawyers Tang Jingling and Chang Boyang, who took numerous human rights cases, including ones involving Falun Gong, are now under police custody themselves. The list of these examples is long.

The incident on May 28 was not the first time in Zhaoyuan that thugs beat an innocent woman to death. In October 1999, three months after Jiang Zemin initiated the political campaign against Falun Gong, policemen beat to death Zhao Jinhua, a female Falun Gong practitioner in Zhaoyuan City, 10 days after they abducted her.

Zhao’s was the first reported case after the persecution started of a Falun Gong practitioner dying from torture. When punishing good and encouraging evil becomes state policy, how can we expect anyone to take the risk to save others?