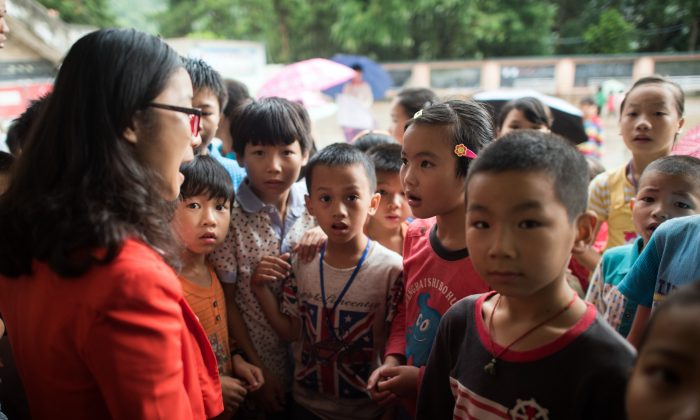 Children in the town of Xianghe, in southern China's Guangxi on June 19, 2015. (JOHANNES EISELE/AFP/Getty Images)
China

A 52-year-old teacher was robbed and beaten to death in the dormitory of an elementary school in southern China on Oct. 18 by three children, the state-run Beijing News reported. The children, aged 11, 12, and 13, did not go into hiding following the killing but instead took the money they stole to an Internet cafe, where two were later arrested.

The other pre-teen was apprehended by police at the school, located in Shaodong County of Hunan Province.

All three suspects are so-called “left-behind children,” that is, the offspring of rural migrant workers who have moved to the cities in search of employment.

Left-behind children, who number 61 million according to state-published figures, live away from their parents for most or virtually all of the year. Some do not even receive calls from their parents during holidays. An estimated two million children are completely unattended by either parent.

These children usually stay behind in their rural communities due to China’s strict household registration policies, known as the hukou system of residency. Without the presence of their parents, who are often too poor to send money home, many left-behind children develop antisocial or criminal tendencies.

According to data published by China’s Supreme People’s Court, left-behind children are responsible for 70 percent of juvenile crime nationwide despite making up 20 percent of the total child population. The Court says that instances of crime among this group has risen an average of 13 percent annually in recent years.

Left-behind children, like the hundreds of millions of migrant workers, are especially vulnerable to abuse.

In April 2014, it was reported to local police in a village located in Guizhou Province that a 30-year-old teacher had raped twelve girls between the ages of 8 and 9. Eleven were left-behind children. State-run mouthpiece Xinhua reported this year that over 2,500 left-behind girls, more than half under the age of 14, were victims of sexual assault in the southern province of Guangdong over the last three years.

The left-behind children were recently brought to the fore when four children, also in Guizhou Province, committed suicide using agricultural pesticides. The oldest of them, aged 13, had left a note addressed to his parents, saying “Thank you for your kindness, I know you have been kind to me, but I have to leave. This has been planned for a long time and today is the day for me to go.”

The plight of Chinese migrant workers and their children is not entirely based in economic hardship, but in the restrictions placed on them by the Communist Party’s hukou policy.

He Qinglian, a prominent Chinese economist who resides in the United States, said in an article published by Voice of America that a long-term solution would have to reunite the migrant workers with their families.

“The Chinese government has to acknowledge reality by allowing urban ‘villages’ and must reduce urban living costs. Children must be allowed to go to schools near their place of residence, not according to the household registry,” He Qinglian wrote. “Only this can cut down the number of left-behind children and provide them a normal family life.”