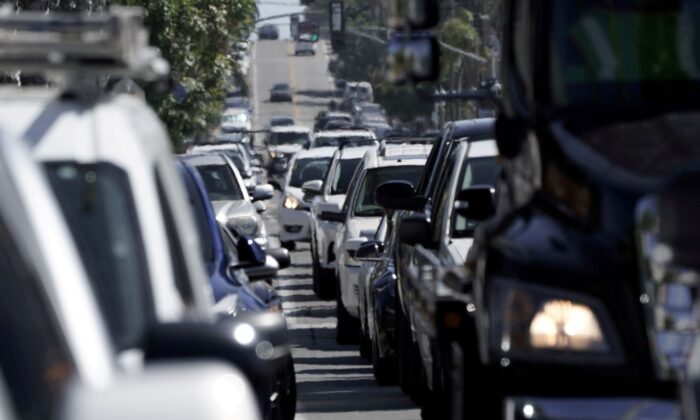 Heavy vehicular traffic is seen in the Ocean Beach neighborhood of San Diego, Calif., ahead of the Fourth of July holiday on July 3, 2020. (Bing Guan/Reuters)
Southern California

Murder Conviction in Road Rage Stabbing of Father of 5 Upheld

SAN DIEGO—An appeals court panel on Jan. 18 upheld the murder conviction of a motorist who stabbed another driver seven times on a South Bay street following a road rage dispute.

Rickey Vernon Smith was convicted by a Chula Vista jury and sentenced to 16 years to life in state prison for the Nov. 27, 2018, slaying of 36-year-old Horace Williams Jr., a father of five. The jury found Smith not guilty of first-degree murder, but convicted him of second-degree murder, plus an allegation of using a knife in the killing.

According to trial testimony, the two drivers got into an argument that continued as they traveled along a series of southern San Diego County roadways, in which Williams threw a soda cup at Smith’s pickup truck and Smith rammed Williams’ minivan.

Deputy District Attorney Makenzie Harvey told jurors that after cutting Williams off for the final time, Smith got out of his truck, walked up to the motorist’s driver’s side window, and punched him.

He then walked away, pulled out a knife from a holster strapped to his hip, walked back to the minivan, and stabbed Williams multiple times, with the fatal blow puncturing Williams’ heart, the prosecutor said. Williams also sustained stab wounds to his arms and legs.

Witnesses saw Williams get out of his van and collapse in the roadway, bleeding heavily. Paramedics took him to Scripps Mercy Hospital in San Diego, where he was pronounced dead.

Defense attorney Brian Watkins told jurors in his closing argument that Williams was the aggressor and that he punched Smith twice in the face when Smith approached his window. Only after Williams began reaching for something near the center console did Smith produce his knife “as a last resort,” Watkins said.

Jurors heard the 911 call Smith made shortly after the stabbing, in which he said Williams cut him off and threw a drink at his truck. Smith told the dispatcher that he followed Williams to find out why he did so, and later admitted to punching and stabbing Williams. Smith said in the call that it was Williams who did the punching and that he stabbed Williams in self-defense, to prevent further attacks.

Smith also said that Williams threw a drink at his vehicle “for no reason at all.”