DOJ: Flynn’s Judge in Catch-22 Situation–Either Disqualified or Not Entitled to Rehearing
0 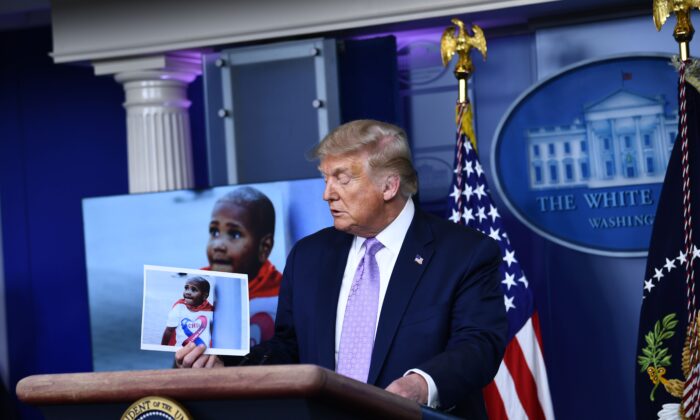 President Donald Trump holds up a photo of LeGend Taliferro, a victim of a crime, during a news conference in the Brady Briefing Room of the White House in Washington on Aug. 13, 2020. (Brendan Smialowski/AFP/Getty Images)
US News

A prosecutor on Thursday has announced charges in the killing of 4-year-old LeGend M. Taliferro, who was shot while asleep in his home in Kansas City, Missouri, in June.

Ellis has been accused of firing bullets into a home at Citadel Apartments from an area behind the building. Investigators said the bullets were fired through a privacy fence and a sliding glass door. At the time, Taliferro was asleep on the floor inside the apartment when he was struck. The child was brought to the hospital where he was later pronounced dead.

A witness in the parking lot said the suspect of the gunman had a “fade cut” and facial hair on his chin, which matched the general description of Ellis, according to court documents (pdf).

Taliferro’s aunt, who was inside the apartment, told investigators that she was asleep on the couch at the time of the shooting, the court papers said. She said she has a son with Ellis and provided investigators with contact information.

The woman said a few days ago she was struck in the head at her residence she shared with Ellis. The 22-year-old then “yanked” their child out of her arms and left, investigators said. The woman complained about the assault to her brothers who then went to confront Ellis. One of the brothers is Taliferro’s father who lived at the Citadel Apartments. Taliferro’s aunt also moved in with her family after the incident, out of fear that Ellis would harm her, the court papers said.

She said during that time she had received threatening social media messages from Ellis and his mother. She said she filed a police report regarding the incident and also filed an ex-parte against Ellis.

Police obtained surveillance video from the night of the shooting and determined that a rental car was used. Investigators interviewed the person who had driven the car that day. The individual told investigators that on the night of the shooting, she had a party at her home. She left the party with an unnamed individual and Ellis, who asked her to take him to Citadel Apartments. When they got there, Ellis got out of the car. She later heard gunshots and Ellis eventually came running back to the car, where she then heard a gun hit the floor, the court papers said.

She then drove to her residence then left Ellis and the other occupant in the car. She told investigators that she only learned later that someone had been killed.

LeGend Taliferro became the namesake of a federal initiative aimed at reducing violent crimes: Operation Legend. It first launched in Kansas City, Missouri, as part of President Donald Trump’s promise to assist cities that have been hit by a recent string of violence, the Justice Department (DOJ) said. The operation has since been expanded to Chicago, Albuquerque, Cleveland, Detroit, Milwaukee, St. Louis, and Memphis.

The operation involves surging federal agents from the FBI, U.S. Marshals Service, Drug Enforcement Agency, and Bureau of Alcohol, Tobacco, and Firearms and other resources to supplement state and local law enforcement agencies in fighting crimes such as ones involving violent gangs, gun, and drug trafficking organizations.

“The arrest and state charges resulted from cooperation among Kansas City police officers, the FBI, and U.S. Marshals. This development is a model for joint efforts to solve crimes and reduce violence in other cities,” Barr said in a statement.

“Although LeGend’s suspected murderer has been arrested, Operation Legend will go on. Inspired by this success, federal law enforcement will continue working tirelessly to support state and local partners in our shared mission to keep the American people safe and enforce the rule of law,” he said.

Trump called the arrest “really good news” during a press conference on Thursday.

At the time of its launch, the operation faced resistance from numerous cities as it was unveiled during a time when the Trump administration was facing widespread criticism for sending federal agents to Portland, Oregon, to quell rioting around a federal courthouse.

Local authorities of the cities have generally been receptive to the expansion of the operation saying that they accept the support as long as it complements the already existing law enforcement work in the cities.

House Democrats during a recent Judiciary Committee hearing with Barr criticized the operation and grilled the attorney general over the initiative. During the hearing, Barr pushed back criticism, saying that the characterizations were an attempt to conflate Operation Legend and the federal deployment in Portland, Oregon, which the Trump administration has faced intense scrutiny for.

“You’ve conflated two different things. The effort, like [Operation] Legend, is to deal with violent crime. … That does not involve encountering protesters, as you refer to it. Civil disturbance is a different set of issues,” Barr said. “And I just reject the idea that the department is flooded anywhere in an attempt to suppress demonstrators.”

Correction: An earlier version of the article incorrectly identifies the city of the prosecutor who made the announcement. The prosecutor is from Jackson County.