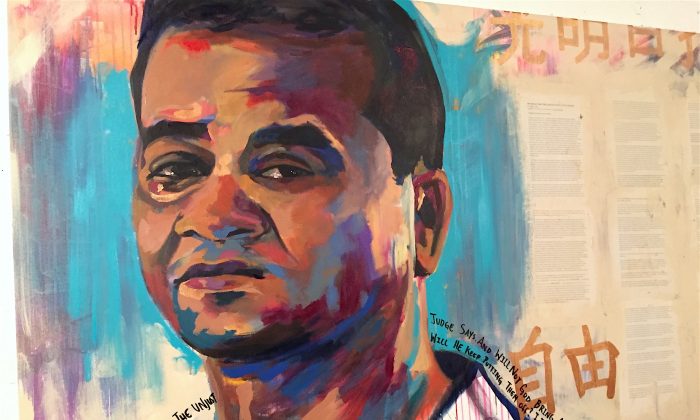 A mural is on display at the Container Yard for an Art for Amnesty event in Los Angeles, Calif. on Dec. 10. (Sarah Le/Epoch Times)
Southern California

Mural Created in Support of Uyghur Prisoner of Conscience

LOS ANGELES—Renowned Uyghur economics scholar Ilham Tohti is serving a life sentence in China on charges of “separatism,” while thousands of human rights activists around the world are showing him support and raising awareness of his case.

A mural was dedicated to Tohti on Saturday, Dec. 10 at the second annual Art for Amnesty event at the Container Yard in downtown Los Angeles during Human Rights Day weekend, from December 7 through 11.

Amnesty International worked with American artists to create a total of twelve original five-foot by eight-foot murals for twelve prisoners of conscience around the world, including Tohti.

“We highlight them and ask our guests to sign letters to help release our prisoners of conscience, and to support them and uplift them. But it’s also just a great space for the community to come together, to see the work of local artists, to kind of mingle and have a good time,” said Muna Sharif, associate field organizer for Amnesty International’s western region.

Tohti was arrested in 2014 while a well-respected professor at Minzu University in Beijing. Earlier this year, he received a high-profile human rights award from the Martin Ennals Foundation in Switzerland for his work to increase dialogue and understanding between Uyghurs and ethnic Han, the dominant ethnic group in China.

The mural dedicated to Tohti for the Amnesty event featured his profile and several sheets of paper with lines from one of his articles, as published on the website China Change.

“There are unfortunately so many political prisoners around the world. For one to be highlighted as a representation of all the injustice in the world really meant a lot to her,” said Sharif.

The Saturday event later included a 90-minute art challenge between two teams of two painters each on the topic of human rights, organized by Secret Walls. Natasha Lillipore and Joey Lee won the battle against Mysterious Al and Frank Zilla.

In addition, Amnesty International worked with Arts for LA and the Arts for Incarcerated Youth Network earlier in the week to install a human rights mural created by both artists and students at the Central Juvenile Hall, a youth detention center. At a dedication ceremony, the students shared how much the process inspired them.

Related Coverage
How China’s Regime Is Isolating the Uyghur People

“Art has the distinctive power to bring people together and promote social change by compellingly, telling the stories of those who have experienced human rights abuses,” said Marvin Bing, Art for Amnesty Creative Director in a press release. “This year and every year, Art for Amnesty is standing with human rights defenders across the world and in particular, with the individuals and communities highlighted in our 2016 Write for Rights campaign.”

The Write for Rights program, which runs through December 31, has had success in the past. Last year’s campaign resulted in the release of three prisoners this year, including Phyoe Phyoe Aung, a student leader in Myanmar who faced more than nine years in prison after advocating for academic freedom, and Fred Bauma and Yves Makwambala, who faced possible execution in the Democratic Republic of Congo after advocating for democracy.