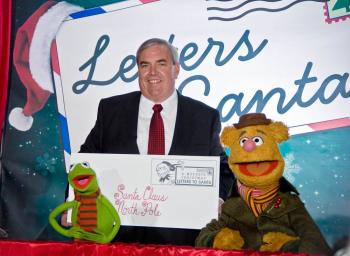 Muppets Kermit the Frog (L) and Fozzie Bear joined Postmaster General Jack Potter at the main post office on Tuesday to kick of the holiday 'Letters to Santa' program, which enlists volunteers to reply to children's letters to Santa. (Aloysio Santos/The Epoch Times)
US

By Epoch Times Staff
biggersmaller
Print
NEW YORK—Muppets Kermit the Frog and Fozzie Bear were hanging out at the main post office with Postmaster General Jack Potter on Tuesday to kick off the holiday “Letters to Santa” program.

The program is a letter adoption program that enables members of the public and charitable organizations to respond to children’s letters addressed to Santa Claus, the North Pole, and other seasonal characters. New York City’s “Operation Santa” program is the largest in the nation with tens of thousands of people adopting letters each year.

The Postal Service is honoring Kermit the Frog this year with a postmark carrying the famous Muppet’s image stamped on the expected 16 billion cards, letters, and packages that are expected to be mailed during the month of December.