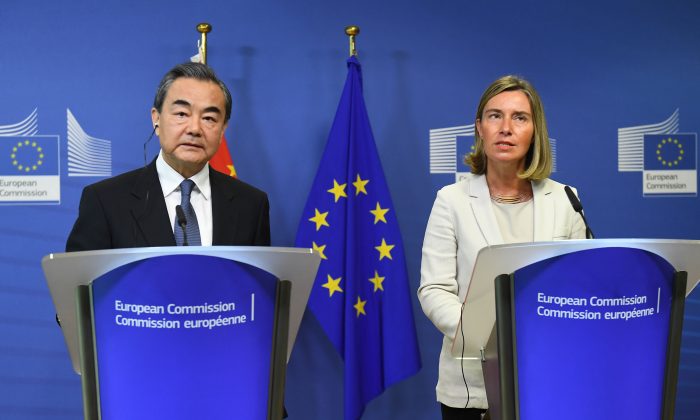 For the Chinese Communist Party (CCP), the Munich Security Conference (MSC) turned out quite differently this year. With the 57th annual conference postponed until February 2022 due to the pandemic, the MSC held a special edition video conference—without China—on Feb. 19, and held a separate virtual live event with Chinese Foreign Minister Wang Yi on May 25. The meeting revealed major challenges posed by Beijing on the West.

The Munich Security Conference was founded in 1963 as a transatlantic family reunion between Europe and the United States. The MSC first invited participants from Russia and Central and Eastern European countries after the end of the Cold War, and later opened its door to other countries, such as India, Japan, and China. It has become the world’s leading forum for international security policymakers to exchange views.

Wang Yi has been a familiar guest at the MSC since 2002. During the 2020 conference, he delivered a speech entitled, “Crossing the East-West Divide and Upholding Multilateralism.” In this year’s separate session with the MSC, Yang repeated the same rhetoric. But the international situation has changed significantly due to the pandemic and the CCP’s rampant “wolf warrior” diplomacy over the past year or so.

Marxism first appeared in the West as a counter-current to Western civilization. The unprecedented disaster that had been caused by the communist usurpation of state power made the people of the former Soviet Union and Eastern Europe finally reject it. However, as the largest remaining communist regime, the CCP still sticks to the communist ideology as a banner to maintain its rule.

The irreconcilable differences between the CCP’s ideology and universal values—based on democracy—dictate that there must be a duel between the CCP and the free world until an ultimate winner is determined. Having realized that it’s far from being strong enough, the CCP has been biding its time to develop itself while using all means to hide its true colors, until recently, when it has started to show its true nature through its wolf warrior diplomacy.

As a matter of fact, the CCP is far more deceiving and dangerous to the free world than the former Soviet Union, as it has infiltrated the international community—particularly the West. Wang’s claim that the CCP is a trusted partner and not a systemic threat to the international rules-based order is simply a shameless lie.

According to Wang, a survey by the Harvard Ash Center revealed that 95 percent of Chinese people support the Chinese communist regime—he touted it as China’s “democracy” that would replace the democracy of the West. In reality, the people’s basic human rights are severely suppressed, with no freedom of belief nor freedom of speech. Even if the survey results showed that the people “support” the CCP 100 percent, the situation is like the emperor’s new clothes, where the truth is concealed and falsehood is prevalent.

As far as Chinese history is concerned, the hard work and exploration of the modern era led to the establishment of the Republic of China (ROC)—the first democratic republic in Asia—by Sun Yat-sen and his followers in 1912.

It was the CCP that gripped power through violent subversion of the ROC in the mainland, turning to the darkest page in Chinese history. Since the CCP came to power, more than 80 million innocent people (pdf) have lost their lives, and half of the Chinese people have been persecuted by the CCP. And an “unprecedented evil” on this planet—the live organ harvesting from Falun Gong practitioners for transplantation for profit—continues to this day.

The Chinese people have started to see the tyranny and evil nature of the CCP, with more than 370 million of them having publicly declared their withdrawal from the Party and its affiliated organizations. The CCP will soon disintegrate. The international community should be aware of this and make appropriate preparations.

According to Wang, the CCP has always viewed Sino–European relations from a strategic perspective and considers “cooperation” as the general direction and main tone. That may sound good, but it’s important to take a closer look.

Indeed, Europe has been a key target of the CCP’s long-standing efforts through its united front organizations (pdf). As early as the 1970s, Mao Zedong advanced the “Three Worlds Theory” that treated Europe as the “Second World” and different from the “First World” of the United States and the former Soviet Union, supporting European integration and Europe as an independent pillar among the world powers. That was fundamentally aimed to divide the Western world by pulling Europe away politically, economically, and technologically, as part of the communist regime’s grand scheme and geostrategic jostling across continents.

In March 2014, Xi Jinping proposed in Brussels to build the so-called Four-Pronged Partnership between China and the European Union on peace, growth, reform, and civilization. This approach has the same purpose as Mao’s “Three Worlds Theory.”

Wang said the CCP sees the EU as a partner, not an adversary—but this is a lie. Although the EU has somewhat distanced itself from the CCP in recent years by positioning itself as a partner, competitor, and systemic rival, the EU wants to play the role of a “balancer” between the United States and China. In light of the CCP’s wolf warrior diplomacy, its atrocious human rights violations in Xinjiang, and pressure from the international community, the EU imposed sanctions on the CCP for the first time in 32 years in March, but only symbolically. However, as this year marks the 100th anniversary of the founding of the CCP, Beijing wants to play tough in its tit-for-tat retaliation through sanctions against the EU.

On the surface, the CCP may be overreacting at the expense of the EU-China Comprehensive Agreement on Investment (CAI). But in reality, it’s an outpouring of the CCP’s hostility and contempt for the EU.

Wang said both sides should avoid false information that would obscure the truth, not let the political virus (COVID-19) destroy the unity, and lay a solid social foundation for the stability of China–EU relations.

The CCP bullies other countries and oppresses its own people. These are just two sides of the same coin of totalitarianism. Domestically, it has deprived Chinese people of their basic human rights and freedoms, with a whole society full of fake news under its censorship. Internationally, the CCP has been a political virus and the source of disinformation aimed to cover up the truth about the origin of COVID-19, which has wreaked havoc around the world. Given the true nature of the CCP, how can Sino–European relations be stable and far-reaching?

It’s important to note that while the CCP often talks the talk, it does so with a different spin in order to advance its own agenda. For example, the CCP keeps saying that it’s always a defender rather than a challenger, a builder rather than a destroyer, and a contributor rather than merely a beneficiary of international order.

Please note that the term “international order” here is by no means the existing international rules-based order. In a high-level meeting between the CCP and the United States on March 18, top Chinese diplomat Yang Jiechi forcefully stated that the CCP would follow an international order of its own, not a rules-based one advocated by a small group of countries. The small group that he referred to are the Western countries, including the United States and Europe, and the EU can’t naively think that it’s discluded within this group.

In short, we should listen more closely to the CCP’s words and observe its actions more carefully. An accurate understanding of the CCP’s rhetoric and way of thinking is a prerequisite and a basic skill for the West to successfully cope with it. The West has already suffered many losses while dealing with the CCP and this can’t continue.