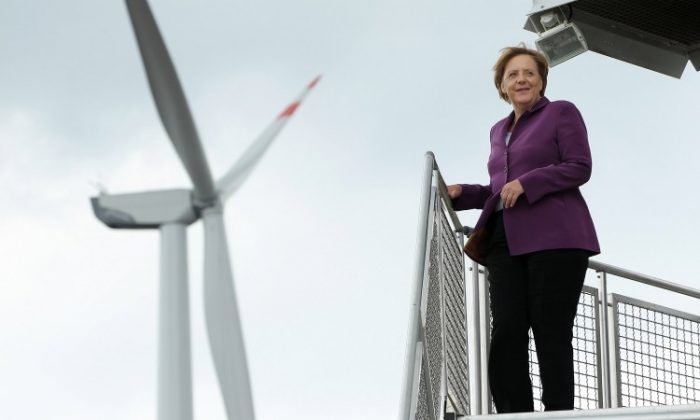 German Chancellor Angela Merkel pauses on a wind turbine platform while visiting a windpark on Aug. 18, 2010 in Krempin, Germany. Following Germany's decision to cut off its reliance on nuclear power, Munich is looking to make wind power one of its main electricity sources. (Sean Gallup/Getty Images)
Business

MUNICH—Since the pledge to stop all nuclear energy plants in Germany by 2022 was signed, many new projects in alternative energy are coming to fruition. One of the latest statements were made by Christian Ude, the mayor of Munich, who set a target to have Munich be completely supplied by green energy by the year 2020.

The big bet to reach this ambitious goal is in wind energy, which is considered cheaper to build than other types of alternative energy generation plants. Bavaria, the state where Munich is the capital, is known to have the biggest potential for on-shore wind parks in Germany.

“Bavaria has the biggest potential for wind energy in the whole Germany, but at the same time it an emerging market in this field,” said Christian Ude.

Other German states in comparison have a lot more wind parks than Bavaria, which currently has only 486 wind turbines. For example, state of Niedersachsen has 5,501 wind turbines and the state of Brandenburg has 3,053 turbines. The city of Munich has only 1 turbine in construction at the moment.

The plan is to build an additional 200 wind turbines supplying 1 billion kWh (kilowatt hours) by 2020. Each turbine produces around 5 million kWh and can supply approximately 2,000 households with their electricity needs. If Munich’s population is 1.3 million and each household has about 3.5 people, then, mathematically speaking, 200 turbines would exactly cover the entire city with electricity. In addition to wind energy, there are other alternative energy sources that will also pitch in their stake in the green energy portfolio such as solar energy, biomass, biogas, etc.

Of course, the wind turbines cannot be built directly in the city of Munich, as that would disturb the normal way of life with high noise level and constant turbulence produced by rotating turbines, not even mentioning the city’s visual appearance with turbines rotating everywhere. Instead, the plan is to build them in the villages and communities outside of Munich. So far, 40 communities have already shown interest in having small wind parks consisting of maximum three turbines installed.

The cost of building one wind turbine is around 5 million euros (US$6.6 million) and building 200 turbines would amount to a 1 billion euros investment. At the moment, communities state that they could cover 50 percent of costs, while also wanting to receive 50 percent of profit from the project. The rest should come from either the government or other private sponsors. The biggest sponsor so far is SWM Bayernwind, a subsidiary of StadtWerke München GmbH, which is the largest energy producer in Bavaria.

There are also parties that do not support this project, stating that it would disturb nature, scenery, and create noise and turbulence. It is known that whoever lives close to the rotating turbine could feel the ground slightly throbbing as if a small earthquake. Turbines are also known to hit birds with their blades.

The pro wind energy argument is that one wind turbine producing 5 million kWh per year could supply 2,000 households with electricity and thereby replace 1.9 tons of coal, which saves about 5,000 tons of CO2 emissions into the atmosphere. It is also contributing to the fact that large scale disasters such as Fukushima nuclear accident could be avoided if nuclear energy is replaced by much safer wind energy.