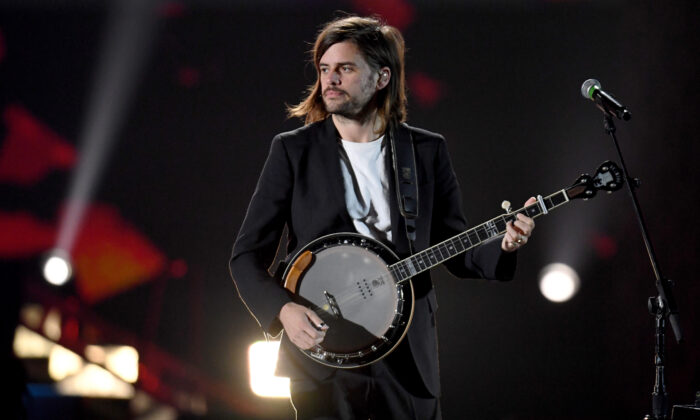 The decision comes after Marshall was embroiled in a Twitter storm over his comment on a book by U.S. journalist Andy Ngo.

Writing in a blog on Medium, the 33-year-old musician said he decided to leave his beloved band so he could speak freely without affecting his friends and bandmates Marcus Mumford, Ben Lovett, and Ted Dwane, who wished him well after his announcement.

After reading Ngo’s book Unmasked: Inside Antifa’s Radical Plan to Destroy Democracy in March, Marshall wrote to Ngo in a Twitter comment, congratulating the author for his “important book” and being “a brave man.”

Marshall said that posting about books had been a theme of his social media throughout the CCP (Chinese Communist Party) virus pandemic, but the tweet he believed to be “as innocuous as the others” attracted “tens of thousands of angry retweets and comments” within 24 hours, and his bandmates and their families also become targets of attack.

“Despite being four individuals we were, in the eyes of the public, a unity. Furthermore it’s our singer’s name on the tin. That name was being dragged through some pretty ugly accusations, as a result of my tweet,” Marshall wrote.

“The distress brought to them and their families that weekend I regret very much. I remain sincerely sorry for that. Unintentionally, I had pulled them into a divisive and totemic issue.”

Marshall said his bandmates invited him to stay on despite the pressure to nix him.

He made an apology over his tweet, partly to protect his bandmates, partly due to the fact that maybe he “did not know something about the author or his work.”

Marshall said he continued to be mobbed on Twitter, this time from both sides, for the “sin of apologising” as well as being “right-wing.”

Labelling himself as fluttering “between ‘centrist,’ ‘liberal,’ or the more honest ‘bit this, bit that,'” Marshall stood by him first tweet after reflecting.

“The truth is that my commenting on a book that documents the extreme Far-Left and their activities is in no way an endorsement of the equally repugnant Far-Right,” he wrote.

“The truth is that reporting on extremism at the great risk of endangering oneself is unquestionably brave,” Marcus continued.

“I also feel that my previous apology in a small way participates in the lie that such extremism does not exist, or worse, is a force for good.”

Quoting Russian writer Aleksandr Solzhenitsyn’s essay titled “Live Not By Lies,” the musician said he decided to leave the band because he couldn’t continue self-censoring.

“I could remain and continue to self-censor but it will erode my sense of integrity. Gnaw my conscience,” he said. “I’ve already felt that beginning.”

But to speak out would “inevitably” bring his bandmates more trouble, a consequence Marshall said his “love, loyalty, and accountability to them cannot permit.”

Marshall concluded that the “only way forward” is to distance himself from the band and hope he can speak his mind without the others suffering the consequences.