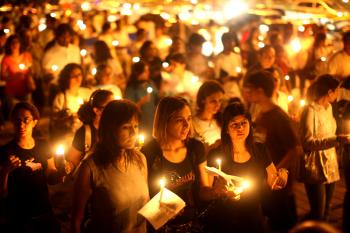 Mumbai Residents walk with candles in the street near The Oberoi Hotel during a demonstration against the recent terror attacks in the city on November 30, 2008 in Mumbai, India. (Uriel Sinai/Getty Images)
International

After Mumbai Carnage, Questions Amidst Tales of Heroism

By Suman Srinivasan
biggersmaller
Print
When I was little, my dad would often tell me stories about India’s “Black Cat” commandos. They were supposed to be the bravest in the nation, the crack commandos who trained in ruthless conditions, prepared to defend Indian citizens in times of need. They were the elite commandos of India’s National Security Guards (NSG) unit, named “Black Cats” for their all-black outfits that didn’t carry any identifiable insignias.

For many of us brought up on their tales of bravery, the terror and carnage of Mumbai 11/26 would be the first time we saw and heard about the Black Cats in action. Their bravery and courage were lived out in the flesh and blood as they secured the Taj Mahal and Oberoi-Trident hotels and Nariman House in downtown Mumbai, killing the gunmen who had unleashed a wave of terror on the city.

Their killing of the final two terrorists in the Taj late Friday afternoon brought an end to the three-day siege that had caught the nation and the world in shock.

As the commandos rested their unshaven faces, weary bodies, and aching backs—several of them had gone two days without sleep—little children and elderly Mumbaikars walked up to them, thanking them profusely, shaking their hands and handing them roses.

Those were probably the most touching and humane moments in the climax of an otherwise horrific 60-hour ordeal that left the entire world shocked. And started to raise questions.

Who Were the Terrorists?

Among the first questions asked was: who were the terrorists? How had they been so ruthlessly efficient, and how had they planned their attack so meticulously?

Several Indian media reported that a group called the “Deccan Mujahedeen” had e-mailed a statement to several media claiming responsibility. However, follow-up news reports in Indian and overseas media quoted major intelligence and counter-intelligence sources as saying that the group’s name drew a blank, and that it was most likely a front name for another organization.

The New York Times quoted several U.S. intelligence and counter-terrorism officials as saying that mounting evidence pointed to a Pakistani militant group based in Kashmir as responsible for the Mumbai attacks. Lashkar-e-Taiba was named as the most likely group.

Indian media reported that bags apprehended from the terrorists contained cell phones and satellite phones that were used to communicate with a “foreign country,” most likely Pakistan.

However, some terrorism analysts have not ruled out local homegrown terrorist groups as being responsible for the carnage.

How Will India Respond?

By Sunday night, the Indian public’s response had turned to outrage and anger at the militants—and the government. Protestors had gathered at the Taj Mahal Hotel, holding signs critical of the government.

India’s Home minister, Shivraj Patil, resigned on Sunday, saying that he took “moral responsibility” for the fallout from the attacks. He is succeeded by P. Chidambaram.

India has raised the country’s security level to “war level.” Prime Minister Manmohan Singh opened up cross-party talks to discuss the setting up of a federal and legal framework to deal with the Mumbai attacks and to deal with terrorism in the future. There is also discussion on setting up the elite National Security Guards (NSG) units in several key cities, instead of only New Delhi where they are currently deployed.

There are also fears that there will be a military response by India on Pakistan, whom the government has repeatedly pointed to as the source for the attacks. The Bush administration and the Office of the President-Elect Barack Obama are reported to be in touch with Indian PM Singh’s office, but with the anger that has erupted in wake of the carnage in Mumbai, tensions are rising.

Whose Fault Was It?

The carnage in Mumbai was the most outrageous terrorist assault yet in the financial capital of the world’s largest democracy. The fact that the terrorists were able to slip in almost undetected through the sea, docking at an Arabian Sea port and being able to unload with only a few witnesses who questioned them and no security checks has raised questions about the lax security.

It was also apparent in early hours of fighting that Mumbai’s police were simply too under-equipped and ill-prepared for a terrorist assault of this scale. In the first few hours of the fighting, Mumbai police lost some of their most senior anti-terrorist officials, including anti-terrorism chief Hemnant Karkare.

Even India’s elite NSG unit lost two men in the battle, Sandeep Unnikrishnan and Gajendar Singh, both of whom received a heroes’ burial.

The Indian security forces have also been severely criticized for their lack of planning in the response operation. One British official was quoted as saying to several U.K. media: “They are supposed to set up a command center in complete control as their first priority. Instead they arrived and went in guns blazing.

“It was blind. They didn’t have maps of the hotels, yet there terrorists had done enough reconnaissance to use the service facilities to maneuver.”

A senior Indian special forces source said: “There were far too many command centers with each one trying to best the other which led to confusion and delayed operations.”

It was clear that even India’s premier and elite battle units were unprepared for the terrorists who were ruthless and well-trained.

“They appeared to be a determined lot, wanting to create and spread terror. … These people were very, very familiar with the hotel layouts,” the Associated Press quoted an unnamed commando from India’s Marine Commando unit.

“The bodies were lying strewn here and there and blood was everywhere,” the commando said, adding that the terrorists were well-trained and planned. The gunmen showed “no remorse to anybody, whoever came in front of them they fired.”