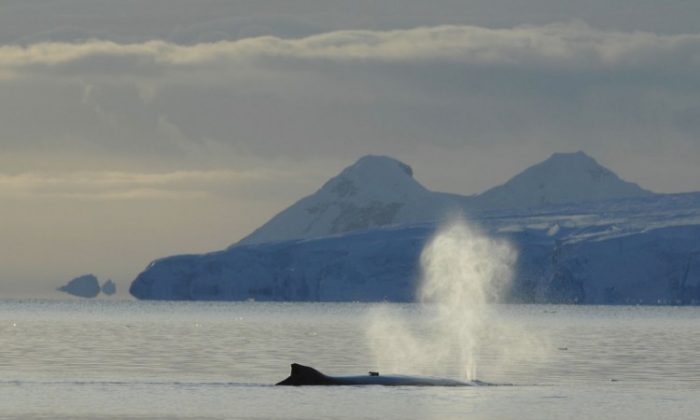 Singing while eating isn’t recommended for humans, but humpback whales have been recorded doing so in a new study.

The reason whales sing is a mystery to scientists, but we do know that they sing most often during the breeding season. However, they also sing at other times, and U.S. scientists recently recorded 10 humpback whales singing breeding songs while foraging.

The researchers tracked the whales with harmless suction cup tags. All 10 of the whales sang while they ate, but two of them sang the long and complex songs that are usually only heard in mating season.

“We were surprised to find such structured song in the Antarctic feeding ground,” said study lead author Alison Stimpert at the Naval Postgraduate School in a press release.

Whales usually have separate times and places for different activities. They breed and sing songs at their breeding grounds, and then they migrate to their foraging grounds to eat.

In this study, however, the whales sang in the foraging grounds. They even sang during periods of diving over 100 meters deep.

“The tag data are also exciting because this is the first time that we can see that the singers aren’t sitting off by themselves like they do on the breeding grounds—they’re right in the midst of the feeding action, choosing to sing instead,” said Stimpert.

“These data show behavioral flexibility as the humpbacks manage competing needs to continue to feed and to prepare for the breeding season during late fall,” the researchers wrote in their paper.

“This may also signify an ability to engage in breeding activities outside of the traditional, warm water breeding ground locations.”

The paper was published in the journal PLOS ONE on Dec. 19.