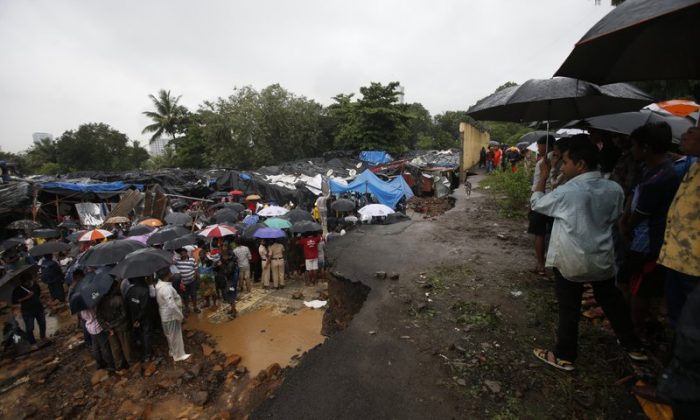 Rescuers and others gather at the spot after heavy rainfall caused a wall to collapse onto shanties, in Mumbai, India on July 2, 2019. (Rafiq Maqbool/Photo AP)
US News

At least 21 people were killed and more than 60 others injured when a 10-meter (35-foot) wall demarcating an urban forest collapsed during the night in Mumbai, police officer Ravinder Howle said.

Rescue teams with sniffer dogs were searching the area afterward, and rescuers from the Indian navy also fanned out to help and rescue residents of the waterlogged city, India’s financial and entertainment capital.

Six migrant construction workers were killed and five injured when a wall collapsed on their tin-roofed huts in Pune early Tuesday, an officer in the city’s Police Control Room said.

A 45-year-old watchman died when a wall collapsed on him late Monday night, police said.

Howle said two men died after they were trapped in a submerged car, raising the overall death toll in the state to 33.

The monsoon season in India brings heavy rains from June to September that cause flooding and other damage. Building collapses are common as the rains weaken the foundations of poorly built structures. On Saturday, another wall collapse in Pune killed 16 people living in a cluster of tin-roofed huts housing migrant workers and their families.

Monday’s rains also flooded roads in Mumbai and covered train tracks. According to Skymet, a private weather forecasting agency, the rainfall was the heaviest in a decade and second-highest in 44 years.

India’s Central Railway said in a tweet that “nature’s fury” made operating trains a “safety hazard” in some areas. Trains were running at partial service Tuesday after thousands of passengers were stranded overnight.

Millions of passengers commute daily on a network of famed railways in Mumbai.

The city has witnessed incessant rainfall over the past few days and floodwaters have entered homes. A public holiday was declared for Tuesday and the Maharashtra government said only emergency services would be functional.

Maharashtra chief minister Devendra Fadnavis tweeted: “People are advised to stay indoors unless there is any emergency.”

Weather officials said Mumbai received the highest rainfall in a decade over a two-day period since Sunday. TV channels showed videos of submerged cars and water flowing through ground floors of some residential buildings.

A domestic flight skidded off the main runway at the Mumbai airport late Monday night, and flight operations were partially restored on Tuesday. At least 50 domestic and international flights were diverted and 50 other flights were canceled.

#Clarification #Mumbai Airport is not closed. As there is a skidding of a flight at main runway, the main runway is closed for operation.
Alternate Runway is in operation & some flights r diverted to Goa. Because of this some flights r rescheduled.#MumbaiRainsLive #MumbaiRain pic.twitter.com/hIEFc2UpWI