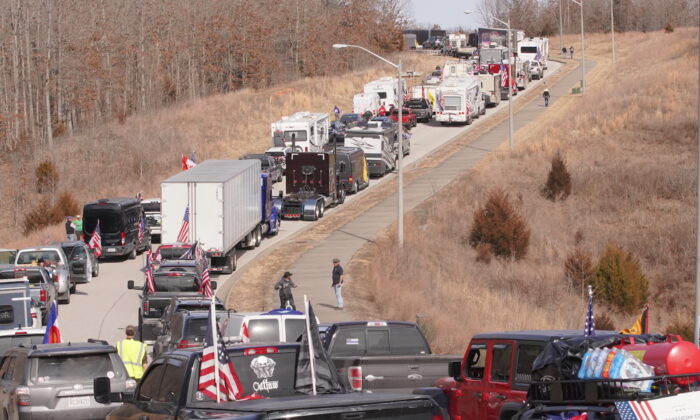 Trucks and vehicles of the People's Convoy on their way to a highway in Missouri, on Feb. 28, 2022. (Enrico Trigoso/The Epoch Times)
Defending America

MONROVIA, Indiana—Several trucker convoys comprising thousands of vehicles converged in Monrovia, Indiana, and held a rally late on March 2 before continuing their trip toward Washington, D.C., to protest against COVID-19 restrictions and mandates.

“The People’s Convoy,” which set off from California on Feb. 23, rolled through multiple states including Arizona, Texas, Oklahoma, and Missouri before arriving in Indiana. The convoy has two more stops to go—Ohio and Maryland—before reaching Washington, where organizers hope to arrive around March 5.

The group was inspired by trucker convoys in Canada that made global news headlines for protesting against COVID-19 restrictions.

It’s hard to quantify exactly how many people are directly participating in the People’s Convoy, not to mention the many thousands more who’ve gathered along the roads and on overpasses across the country to cheer them on.

Vehicles and trucks have also joined the convoy along the way. Some are headed toward Washington, while other supporters join the journey for dozens to hundreds of miles before dropping away, one of the convoy’s organizers previously told The Epoch Times.

Meanwhile, hundreds to thousands of cars and trucks that are following or are ahead of the convoy, and have honked their horns in support, have often been mistaken as being direct participants of the group.

The convoy grew in size to about 80 trucks and more than 200 other vehicles by the time it passed through Cuba, Missouri, on Feb. 28.

By March 1 and March 2, in Monrovia, Indiana, where other U.S. truck convoys converged, there were more than 2,000 vehicles in the convoy, with more than another 100 trucks in the area. It’s unclear how many vehicles will ultimately be riding to the nation’s capital.

Indiana Attorney General Todd Rokita and Mark McCloskey, who is running as a Republican in the Missouri U.S. Senate race, were in attendance at the rally, held at Ted Everett Farm center late on March 2.

“I’m very proud to be here amongst fellow Hoosiers and Americans who care about their country,” Rokita told The Epoch Times. “I was humbled to offer them encouragement this evening but they gave me back much more inspiration and motivation.”

McCloskey, a lawyer, made national headlines in 2020 for having wielded his gun in self-defense while facing a group of Black Lives Matter protesters that had marched into his gated neighborhood.

“The people of America have woken up; we’re going to stand up and we’re not going to permit it,” he told The Epoch Times on March 2.

The crowd exceeded the capacity of the indoor venue, which held several hundreds of people. Hundreds more were gathered outside.

“The American people are waking up and they’re marching east,” Brian Brase, one of the convoy’s organizers, told The Epoch Times late on March 2.

He told attendees: “You can stand up to a government that wants to violate your Constitutional rights … and you should. At this point, this is your civic duty to stand up; it is the civic duty of all Americans, of all citizens of the world, to stand up.

“Freedom isn’t free … Freedom takes sacrifice,” he said, adding that people are sacrificing their incomes and are spending time away from their loved ones to participate in the convoy.

“I’m begging that every truck driver around the world stand up now,” he said. “Now is your time to stand up and send a message to your world leaders and your governments that they work for us.”

Dr. Ryan Cole, a pathologist who owns a medical lab in Idaho, speaking as part of the Front Line COVID-19 Critical Care Alliance (FLCCC), told the crowd, “It’s up to us to take care of our own health, not the government.”

“This is a government that has overstepped its bounds,” he said. “These are health care agencies that have overstepped their bounds. It is time to restore freedom to this great land. There is no medical emergency anymore. If they tell you that, they are lying.”

“Today, we’re all truckers … keep on trucking and let’s stand in freedom and unity with peace, firmness, and strong resolve,” Cole told the rally. “This is about our children. … We will never let this happen to us again.”

Leigh Dundas, another organizer, told The Epoch Times that the recent Russian incursion into Ukraine has meant that U.S. convoys have received less press coverage, if any.

“Everyone’s saying ‘Oh, it’s so unfortunate, the truckers can’t catch a break in the news cycle because of Ukraine and Russia.’ I’m sure Ukraine and Russia have issues, but the timing is interesting,” she noted.

“If I were this administration and I’d watched what had happened in Canada … the last thing I would have wanted is to have my back against the wall down here south of the border. I think any distraction is the name of the game. But it’s not working. … the people have spoken, the people have had it.”

She told the audience that the convoy “will not be going in downtown D.C. for reasons that you all know.”

“I don’t need to spell them out, all I need to say is [the truckers] need to stay safe, and we have seen what was going on in the last year, and that is all we need to know about that.”

Authorities have reinstalled fencing around the U.S. Capitol and have called for “extra security” among law enforcement agencies in the area in anticipation of truck convoys arriving in Washington as well as in conjunction with Biden’s State of the Union Address. The barriers, which had been in place since shortly after the Jan. 6, 2021, breach of the U.S. Capitol, were removed in July 2021.

Dundas said that the People’s Convoy has been “a 100 percent peaceful, safe, awesome, transcontinental journey” and thanked The Unity Project and the American Foundation for Civil Liberties and Freedom for their help in launching the movement.

“We have working dogs, we have security, we have huge logistics teams, we have former Naval commanders—not because we don’t trust the truckers to be safe, but we want to ensure that they are safe, because they are leading the charge in restoring freedom to America,” she told the crowd, which responded with loud cheers and applause.

“We’ve got to exhaust our last peaceful means,” Chance Heiner, an Army veteran, told The Epoch Times on Feb. 28, when the convoy was in Cuba, Missouri. “This is what we gotta do. We’re peaceful, and that’s how we gotta be.

“Right now, we’re peaceful, and we’ve been hoping that the government will give us back our rights.

“And well, the Second Amendment’s there for a reason,” he said. “But we’re a peaceful movement, and we’re hoping the government doesn’t push the people to that point.”