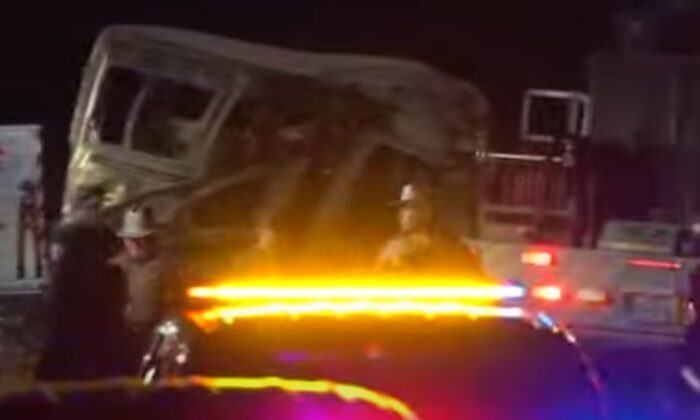 This still image from a video shows the wreckage of a vehicle that was carrying members of the University of the Southwest men's and women's golf team and was involved in fatal crash in Andrews County, Texas, on March 15, 2022. (Screenshot from video via AP)
Crime and Incidents

Several members of the University of the Southwest (USW) men’s and women’s golf team were killed after a minibus collided head-on with a pickup truck in Texas late on Tuesday, authorities said.

Texas Department of Public Safety Sgt. Steven Blanco told KWES-TV there were fatalities in both vehicles, which caught fire, but the identities and the number of dead weren’t immediately released.

“It’s a very tragic scene,” Blanco told reporters at the scene. “We will not be releasing the names and numbers of those deceased as we work with the university to confirm and further the investigation at this time.”

Tyler James, the head coach of the men’s and women’s golf team who just entered his first season, was among those killed, USW President Quint Thurman said in a statement.

“We are still learning the details about the accident, but we are devastated and deeply saddened to learn about the loss of our students’ lives and their coach,” Thurman said, adding that two students had been airlifted to a hospital with serious injuries.

“My understanding is that two of our students have survived and have been airlifted to University Hospital in Lubbock with serious injuries,” Thurman said, KWES-TV reported, adding that he believes those were the only two survivors.

USW also confirmed the deadly crash in a statement on Twitter, saying university officials will continue to provide additional information as it becomes available.

“The university is currently attempting to notify family members of those involved in the accident,” the university said, which is based in Hobbs, New Mexico.

The bus or van was transporting members of the golf teams from a tournament in West Texas, Blanco said, and the other vehicle involved was a Ford F-150. The teams had been scheduled to play in a tournament on Tuesday at Midland College, about 315 miles west of Dallas.

The crash was under investigation, Blanco said. The minibus carrying golf team members was a 17-person van, but details on the exact number of people in each vehicle wasn’t immediately released. The roadway where the crash occurred was closed early on Wednesday.

The crash happened in the same area—but not the same roadway—where three people were killed in November when a pickup truck crashed into a school bus carrying members of the Andrews High School band.

The high school’s band director, the school bus driver, and the driver of the pickup truck all died in that crash.