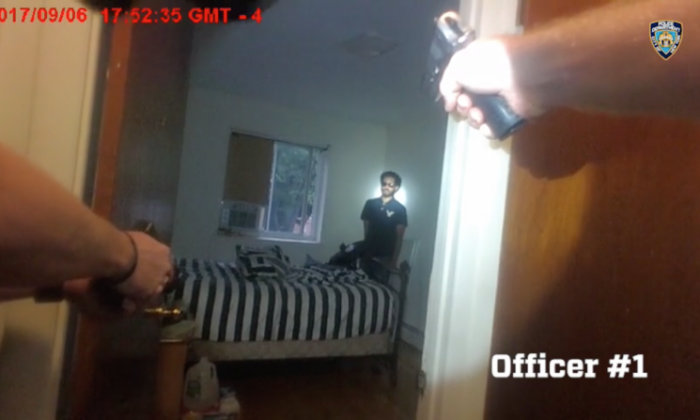 Miguel Richards held a knife in his left hand and stood in the corner of his room for more than an hour, his eyes covered with sunglasses.

That was the beginning of a chilling standoff on Sept. 6 that lasted for more than an hour and ended fatally for Richards, who police say pointed a toy gun with a laser pointer at an officer who approached him with a taser.

The officers asked Richards to drop the knife and put his hands up repeatedly, but he remained motionless, occasionally nodding his head.

The New York Police Department (NYPD) released footage of the incident collected from four police officers’ body cameras. This is the first time ever that the NYPD releases footage taken from body cams.

Richards remained silent as his landlord and his friends implored him to drop the knife and put his hands up. The officers on the scene called in a unit with a taser. They kept guns and flashlights trained on Richards as they awaited the unit’s arrival.

When the police officer with the TASER arrived, he made his way inside Richards’ room at which point Richards pointed what police say was a toy gun with a laser pointer at them. The officers responded by shooting Richards 16 times.

During the hour-long standoff, police officers told Richards to drop the knife 44 times and to drop the gun six times. Meanwhile, Richards’s roommate begged him to drop the weapon 72 times, according to the Daily News.

At one point, the officer slides a cell phone toward Richards with an acquaintance telling him to drop the knife on speakerphone.

NYPD officers are trained to call in an Emergency Services Unit when they are in a standoff. The ESU officers arrived but were still downstairs when the shooting occurred.

“Transparency is one of the many ways this department can continue to keep and build on the trust each of you has worked so hard to earn from members of the community all across our city,” New York Police Commissioner James O’Neill said.

“In the vast majority of these cases, we believe that body-worn camera video will confirm the tremendous restraint exhibited by our officers,” he added.

The district attorney investigating the case and the head of the police union both condemned the release of the footage, saying that the investigation is still ongoing.

“Releasing it in violation of the law will expose the police officers involved to a very real and substantial risk of harassment, reprisals and threats to their safety and the safety of their families,” said Patrick Lynch, the head of the Patrolmen’s Benevolent Association. “If fairness and justice are the goals, they won’t be achieved by suspending police officers’ rights whenever it is convenient to do so.”