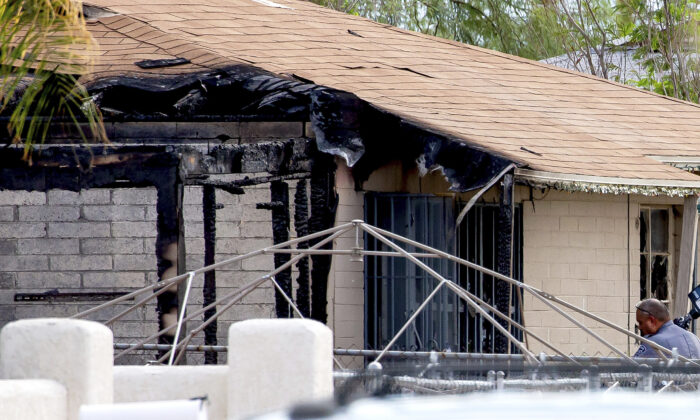 Tucson Police investigators work at the scene of a house fire where a body was found in Tucson, Ariz., on July 19, 2021. (Rebecca Sasnett/Arizona Daily Star via AP)
Crime and Incidents

Multiple People Shot in Series of Attacks in Tucson, Arizona

TUCSON—A gunman killed one person and wounded four others, including firefighters and paramedics, at the scene of a house fire in Arizona on Sunday before being shot by an officer, authorities said.

The 35-year-old suspect, who was critically wounded and remains hospitalized, drove up to the fire and shot at an ambulance crew around 3:45 p.m., Tucson Police Chief Chris Magnus told news outlets.

A “badly burned” body was found inside the home. Children who lived there and were initially missing have since been located unharmed, Sgt. Richard Richard Gradillas said Monday. He would not confirm how many children had been missing.

“This is a highly tragic, really horrific incident, with many unknowns,” Magnus said.

Investigators are still trying to piece together several details.

“We are continuing the investigation and not releasing anything additional right now,” Gradillas said.

The investigation was ongoing. It was unclear what prompted the attacks or if the suspect had a connection to the residents of the burned home.

This story has been corrected to clarify that the police chief said two or three children were missing after the house fire, not three.