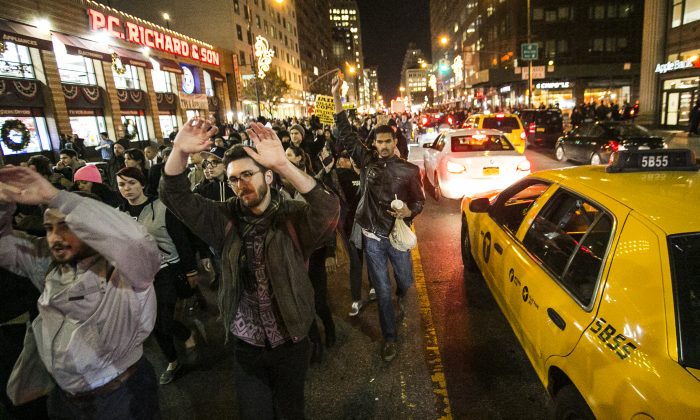 NEW YORK—The day after it was announced that the St. Louis, Mo. grand jury would not indict the Ferguson officer who fatally shot the unarmed teenager Michael Brown, protests erupted again throughout different parts of the city.

Groups of protestors numbering in the hundreds assembled in Union Square and Times Square, beginning at around 5 p.m. Tuesday. Protesters occupied Manhattan, Williamsburg, and Brooklyn bridges, as well as FDR Drive before the night was through.

At around 7 p.m., several hundred protestors gathered at Union Square before they split into two groups to march on the streets—one heading west and one heading east.

Some held signs with Michael Brown’s name, along with other men of color who died at the hands of police: Eric Garner, Sean Bell, and Ramarley Graham among them.

As the crowd marched, they continued shouting slogans like “hands up, don’t shoot,” and “we are all Michael Brown.” Police officers and vehicles followed along as they stalled car traffic.

At the Manhattan bridge protesters shouted: “Black lives matter,” according to a tweet.

At 8:45 p.m. protesters could be seen walking via a live video feed down FDR drive amid vehicle traffic, which was moving at a snail’s pace. They chanted “Who’s street?” Answer: “Our street.”

Another chant: “Hands up.” Answer: “Don’t shoot.” Many on FDR marched with both hands up in the air.

One protestor shouted, “We are occupying FDR drive.”

One driver could be heard saying, “I have never seen FDR drive slower than it is now, and that is saying a lot.”

Lumumba Bandele, 42, arrived at Union Square around 8 p.m. with the civil rights organization, Malcolm X Grassroots Movement. The group decided to join the protests after the no indictment decision was announced Monday evening.

He and his group hope that the continuing federal government’s investigation will lead to an indictment of the officer who shot Brown.

Earlier Tuesday, a small group gathered outside federal court in Brooklyn in one of several demonstrations organized by the Rev. Al Sharpton’s National Action Network. It was joined briefly by city Comptroller Scott Stringer, who said the more measured reaction in the city on Monday night shouldn’t be misinterpreted.

“Just because people acted in a very responsible way doesn’t mean that there’s not a lot of pain being felt in this city,” Stringer said. “There are parents whose heart goes out to the Brown family.”

About a dozen minority City Council members briefly walked out of a meeting at City Hall, chanting “black lives matter” and then later “hands up, don’t shoot” before returning to the meeting.

Mayor Bill de Blasio said there need to be changes, but not through violence.

“The family lost their son. They are in a lot of pain. They’ve been in a lot of pain since the tragedy occurred,” he said. “In the end, what we ought to try to do is alleviate people’s suffering. So the first thing we should think about is the Brown family and everything they are going through.”

The protests were among dozens of rallies set to take place simultaneously across the nation.

Additional reporting by Ananda West and The Associated Press