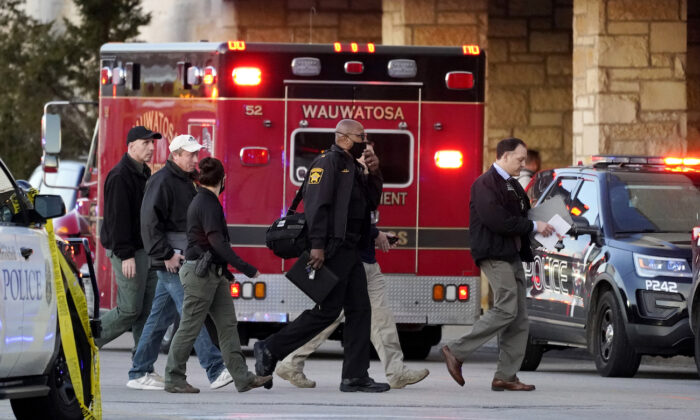 A shooting at a mall injured eight people in a suburb of Milwaukee, Wisconsin. None of the injuries were life-threatening, the city’s mayor announced on Friday afternoon.

Live TV shots from local station WISN12 showed dozens of police vehicles outside a Macy’s department store, where the incident occurred around 2:50 p.m.

At least five people were taken away from the mall on stretchers, two of whom appeared to be conscious and were sitting upright, WISN12 reported. Witnesses told the station that there were eight to 12 gunshots.

Wauwatosa Police Chief Barry Weber gave no motive for the attack in a brief update about three hours after the incident. He said the extent of injuries to the eight—seven adults and one teenager—was unknown, but all were alive. He added that the shooter was “no longer at the scene” when authorities arrived.

“Preliminary statements from witnesses indicate that the shooter is a white male in his 20s or 30s,” Weber told reporters. “Investigators are working on determining the identity of that suspect.”

“The mall is currently closed. Please use alternate routes to get through the area. For the most accurate information, follow our official social media on Facebook and Twitter,” the announcement read.

The Milwaukee division of the FBI announced on Friday afternoon that it was”responding to support local law enforcement tactical response to Mayfair Mall shooting incident.”

Brookfield Properties, the owner of the mall, said they were “disheartened and angered that our guests and tenants were subject to this violent incident today.”

The mall would remain closed until further notice.

The same mall in February saw another shooting where a city police officer, Joseph Mensah, shot and killed 17-year-old Alvin Cole. Mensah said he shot Cole because Cole pointed a gun at him. Sporadic protests broke out at the mall several months following the incident.

The Milwaukee County district attorney did not file charges against Mensah. The city agreed to a separation agreement this week, where Mensah will be paid $130,000 to leave the force.