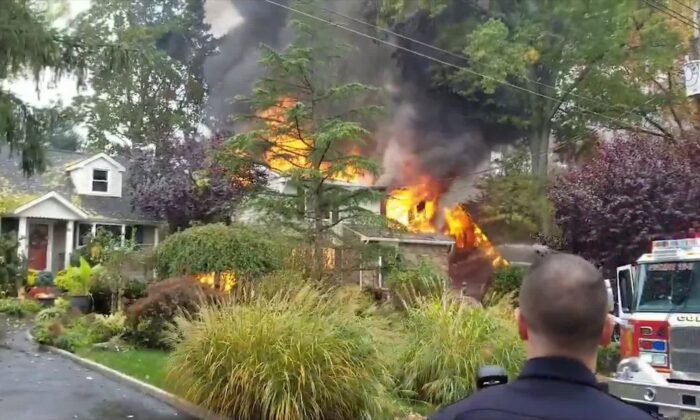 A house caught fire after a small plane crashed into the house in the Colonia section of Woodbridge Township, N.J., on Oct. 29, 2019. (Courtesy of Michael Yonone)
US News

Several homes are on fire after a plane crashed in New Jersey on Tuesday morning, according to news reports.

One home was hit by the plane, causing at least two other homes to catch on fire, the report said.

The Federal Aviation Administration (FAA) said a Cessna 414A crashed into the home.

Around 200 firefighters from nine different local firehouses have responded to the scene, the report said.

“This is all hands on deck,” said John McCormac, the mayor of Woodbridge Township.

It’s not clear if the pilot, who was the only person on board, died or was injured in the crash. No one was at home when the crash occurred, officials said.

“There was nobody home at the time, which was very fortunate. There was a car in the driveway, so everybody thought somebody was home, but nobody was home, they confirmed with the owner,” added McCormac. “Right now, we don’t believe any civilians on the ground were impacted by the crash.”

A neighbor, who was not named, told News 4 that the plane was flying low when it went down.

“It sounded really low, it started to sputter a little bit,” he said. “All of a sudden there was this huge explosion, or just this big bang, louder than any car crash I’ve ever heard.”

The mayor told CBS that a woman was able to escape from a nearby home before it caught on fire.

McCormac said the plane was believed to be heading from Virginia to Linden, New Jersey.

The crash occurred about 4 miles from the Linden Airport, he told another news outlet.

“The plane is in the back of the house,” McCormac told the New Jersey Star-Ledger newspaper. “You can’t see the plane from the street. It’s still apparently lodged in the house. The lady next door got out safely.”

News12 in New Jersey reported that several streets in the area were closed due to the fires.

Reports have also said that the power and gas were both turned off in the area.

The cause of the crash is not clear.