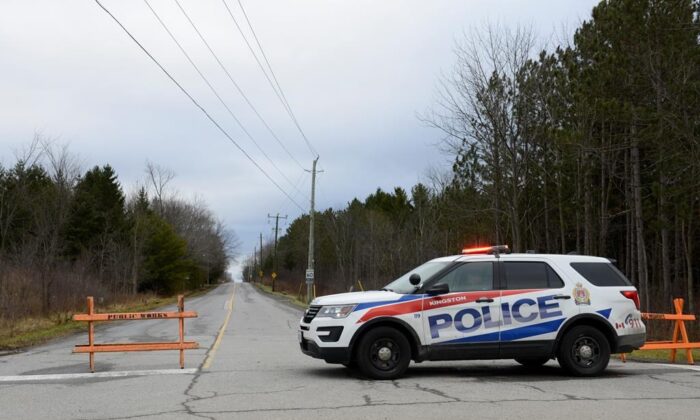 A police car blocks the end of Creekford Road in Kingston, Ontario, Canada, on Nov. 28, 2019. Police in Kingston say there are "numerous fatalities" after a small plane crashed in a wooded area within the city limits. (The Canadian Press/Sean Kilpatrick)
Canada

KINGSTON, Ont.—The Transportation Safety Board of Canada has sent a team of investigators to the site of a small plane crash that left multiple people dead in Kingston, Ontario.

The board says the plane was heading from the Toronto area to Kingston’s airport when it crashed on Nov. 27 at 5 p.m. in a wooded area about seven kilometres from its destination.

Kingston police would not say how many people were on board, and paramedics say they went to the scene but did not treat any patients.

Const. Ash Gutheinz says there’s “no indication” there were any survivors.

He says the area was under a wind advisory at the time, and while winds may not have been as bad as predicted, it was certainly “blustery.”

A spokesman for Canadian Forces Base Trenton said a military helicopter dealt with high winds while it searched for the crash site.

Maj. Trevor Reid said the helicopter crew located the wreckage thanks to an emergency beacon on board the plane.

Multiple residents in the area also noted there was heavy rain and strong winds around the time of the crash.

“I was amazed that anybody was even flying last night because there was lots of notice that this windstorm was coming,” said Rob Gibson, who lives near the site of the crash.

Gibson said in an interview he could hear a helicopter searching for the downed aircraft on the night of Nov. 27, but didn’t hear any sounds from the crash itself.

Krepski told reporters he didn’t know what the weather conditions were at the time of the crash.

The TSB said the plane involved was a Piper PA−32 that was registered in the U.S.