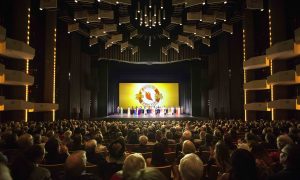 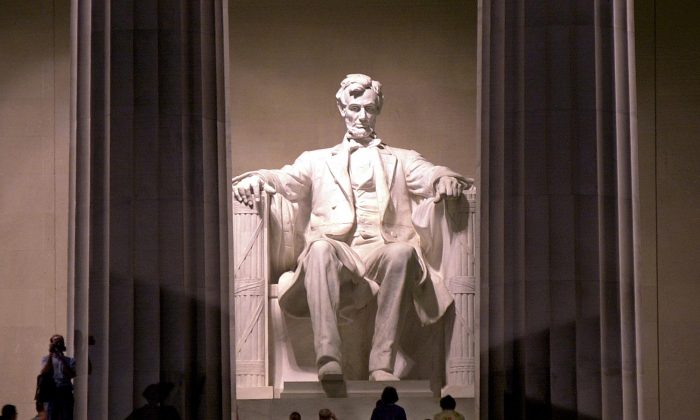 Visitors at the Lincoln Memorial in Washington on July 11, 2001. (EMILIE SOMMER/AFP/Getty Images)
US News

A report on a forum held by the Claremont Institute
By Christopher C. Hull

WASHINGTON–An array of America’s leading intellectuals agreed May 3 that “multiculturalism”—described as the attempt by the West’s enemies to divide and conquer it—constituted a threat to what one called “Americanism.”

That term was described as the legacy of liberty and individualism conceived by the country’s Founding Fathers, ensconced in the U.S. Constitution, and which underwent a new birth of freedom after the Civil War.

According to the program for the event, sponsored by the Claremont Institute and entitled “Multiculturalism vs. America,” the drive toward the former has eroded the latter’s fundamental grasp of citizenship and national identity. Specifically, multiculturalism “perniciously and invidiously divides Americans by race, ethnicity, gender, and sexual orientation,” a list easily expanded to include gender identity, gender expression, and disability, which are other protected classes now etched in policy and often law.

Protecting such classes is an outgrowth of the central idea around which American society is organized, said Christopher Caldwell, a senior fellow at the Claremont Institute. Caldwell cited Abraham Lincoln, who claimed a country is always organized around such a central idea. Americans used to be united around the concept of liberty, Caldwell argued, while the public today is largely organized around justice—or more precisely, “anti-discrimination.”

Based on that idea, said Caldwell, the rights to which protected classes are entitled tend to multiply, “colonizing” larger and larger parts of American life.

As those rights have expanded, they have generated political fallout, as voters were driven to vote for Donald Trump out of anxiety about the claims made by identity politics. To illustrate that fallout, a participant in the event told the story of a voter asked to reconcile his support for then-candidate Donald Trump with his Christian faith. The voter responded: “Are you kidding? If you have a 7-to-2 Hillary court, they’ll be hunting Christians in the streets.”

The participant added wryly, of course, that’s incorrect; instead, “they’ll be hunting Christians in the churches.”

To the extent that people believe America’s majority religion constitutes a key part of the country’s culture, such a sentiment may not be merely anecdotal. For example, Henry Olsen, a senior fellow at the Ethics and Public Policy Center, presented data from a survey asking thousands of respondents whether they believed America had a single culture or many different cultures.

In a distant early warning line of Trump’s victory, Olsen’s 2016 survey found that 71 percent of those surveyed said, “Even if some people are offended, Americans need to be able to speak frankly about controversial issues and problems facing the country.” Another 22 percent asserted the contrary: “People need to be more careful about the language they use to avoid offending people with different backgrounds or values.”

Yet, at the same time, 71 percent of those who self-identified as very conservative said their culture was generally “becoming rarer and less accepted”—nearly quadruple the 18.4 percent of the very liberal who said the same.

Olsen’s data found an echo in that of the Club for Growth, an organization committed to supporting free-market conservatives in U.S. elections. Club President David McIntosh reported that in the 2016 Republican primary data analytics that drove the group’s decision-making, voters driven by racial resentment had grown into the largest subset of Republican voters, which McIntosh charged was a troubling reaction to multiculturalism. McIntosh argued that conservatives concerned about such racial polarization had a responsibility to try to defeat the left’s multiculturalism, if only to try to defuse its growing backlash among their own voters.

That backlash also is being driven by corporate multiculturalism online, according to Raheem Kassam, global editor-in-chief at Human Events. He noted that recently Facebook and Instagram permanently and unceremoniously removed controversial conservatives Laura Loomer, Alex Jones, and Paul Joseph Watson, as well as leftist Louis Farrakhan, known for his diatribes against Jews and whites. Farrakhan was the token radical leftist in the purge, whom both The Washington Post and The Atlantic tried to brand as “far-right.”

Kassam recounted that he himself had recently received an unsolicited “Hi Raheem” email from a Facebook official, informing him that her company didn’t allow “hate speech” on its platform. The official went on to say that Facebook defined the term hate speech as language that targeted or attacked a particular protected class, including on the basis of race, sex, gender, gender identity, or serious disability or disease, and further defined an “attack” broadly as speech that excluded or dehumanized such a protected class, or might, in some cases, cause violence.

Kassam’s post that triggered Facebook’s concern, from more than a decade before, had argued that “men can’t be women.”

Kassam said he asserted his “brown privilege” by replying, first, when he wrote the post he was a Muslim expressing his religion’s view; and second, the post was based on the statistical fact that those who suffer from gender dysphoria are actually more likely to die by their own hands if they are encouraged to self-identify openly as the opposite gender, rather than seek treatment for the underlying mental health issue instead.

As a result, Kassam argued, the Facebook official’s email, by her own definition, was hate speech, and if the company was anti-Islam and pro-suicide, he would be interested to know it.

He didn’t receive a reply.