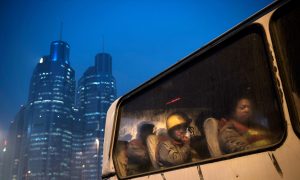 Multi-level marketing giant Herbalife Nutrition Ltd. has agreed to $123 million to settle federal charges that it bribed Chinese officials to advance its business in China, the U.S. Department of Justice said on Aug. 28.

Herbalife, a Los Angeles-based multi-level marketing company that sells health and dietary supplements, admitted to engaging in a decade-long scheme to bribe Chinese officials and falsifying its books to conceal such payments, the department said.

The company entered into a three-year deferred prosecution agreement, in which it admitted to conspiring to violate the books and records provision of the Foreign Corrupt Practices Act, an anti-bribery law. It also reached a parallel agreement with the U.S. Securities and Exchange Commission (SEC).

“Herbalife approved the extensive and systematic corrupt payments to Chinese government officials over a 10-year period to promote and expand Herbalife’s business in China,” acting U.S. Attorney of the Southern District of New York Audrey Strauss said in a statement.

The company will pay a $55 million criminal fine, as well as $67 million to the SEC in a related civil case.

Six weeks earlier, Herbalife agreed to pay $20 million to settle SEC charges that it misled investors about its Chinese business.

In March 2007, for instance, Li and Yang were discussing whether to pay 35,000 yuan ($5,000) to officials at a government agency to reduce the risk of future penalties against Herbalife China.

During that conversation, Li said: “I was thinking it would be better to spend money beforehand than spend money afterwards. This money is a small sum after all, and if we were to be penalized, the figure will be much greater,” according to court documents.

In November 2007, an unnamed high-level executive told Li that he or she wanted to live in Shanghai, but “for legal reasons” the move would be “too risky.” “There’s something called the FCPA, the Foreign Corrupt Practices Act and all of that stuff,” the executive said, according to court documents.

The company did not respond to a request for comment.