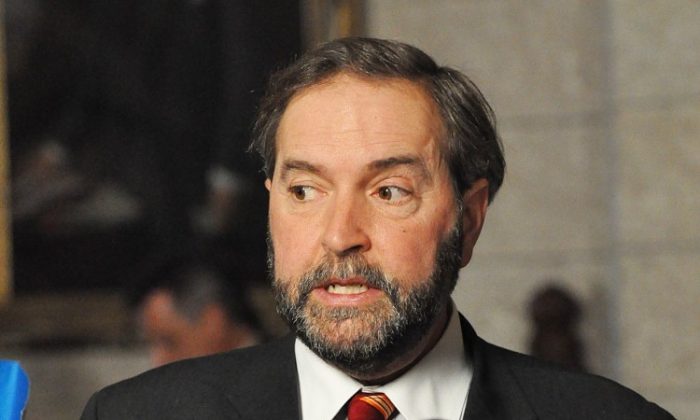 Thomas Mulcair took Outremont, Quebec in a by-election in 2007. On Saturday he won the party's leadership content is Toronto, and the title of Leader of the Official Opposition. (Matthew Little/Epoch Times)
US

TORONTO—Thomas Mulcair was crowned leader of the NDP Saturday after his expected win over second-up Brian Topp.

Mulcair, the country’s new leader of the opposition, won over Topp in the fourth round of voting at the leadership convention in Toronto.

“It is with great honour but also with humility that I accept this position,” said Mulcair in a statement. “The challenges facing me and my caucus are significant, but we have a tremendous team of dedicated and hard-working MPs. I know that by working together we can continue to achieve great results for Canadian families.”

Mulcair campaigned on a platform to continue to modernize the party, pledging to continue the work of Jack Layton.

Mulcair took heavy fire late in the campaign when former NDP leader and party elder Ed Broadbent slammed Mulcair’s intentions for the party, accusing him of wanting to shift the NDP away from its roots. Broadbent endorsed Topp early on in the race.

B.C. MP Nathan Cullen surprised many with the momentum his campaign gathered after he was largely dismissed as a contender early in the race. Cullen, who came in third, tweeted Mulcair that it was an honour and privilege to run with him and that he was looking forward to working together.