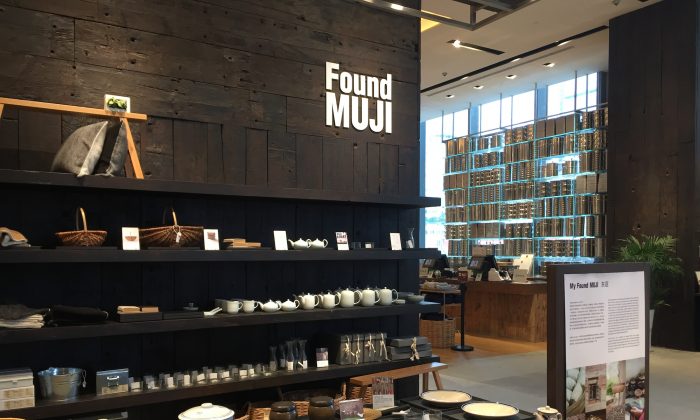 Muji, a Japanese lifestyle brand known for its minimalist-style products, is struggling to stay in business in China after running afoul of the Beijing regime earlier this year, as well as facing competition from a copycat company that has been opening stores throughout the northern part of the country.

The Japanese company, founded in December 1980, currently operates more than 850 stores in more than 25 countries worldwide, including the United States. Its main products include apparel, stationery, tableware, skincare, bags, and suitcases.

In China, there are 235 Muji stores as of July, according to China’s state-run newspaper People’s Daily, citing comments by Satoru Masaaki, president of Ryohin Keikaku Corp., which is Muji’s parent company. China accounted for about 17 percent of the brand’s total earnings, behind only Japan’s 65 percent, Masaaki said, while announcing Ryohin Keikaku’s first-quarter earnings, according to Japanese media Nikkei.

The Japanese company’s “ebbing image” in China has much to do with how Muji failed to include some islands in the East China Sea as belonging to China in one of its product catalogs, according to Global Times, a newspaper known for its hawkish nationalistic views. That occurred in January and drew the ire of some Chinese customers as well as the government.

Beijing has been known to punish foreign companies for failing to toe the Chinese Communist Party’s (CCP) line, especially when it comes to issues of China’s national sovereignty. The Diaoyu Islands, also known as the Senkaku Islands, is a group of five uninhabited islands in the East China Sea currently administered by Japan. However, China and Taiwan have also claimed them as their territory.

In the case of Muji, China tried to lend credibility to its claim over the islands by forcing a Japanese company to yield to Beijing. Japanese Chief Cabinet Secretary Yoshihide Suga, during a Jan. 31 press conference, protested to Beijing over the Muji incident, saying that Japan can’t “accept the measure based on China’s unilateral claims,” according to Singapore-based newspaper The Straits Times. The retail chain eventually scrapped the offending catalog.

The recently opened sites of the copycat retailer are in Mudanjiang City in northern China’s Heilongjiang Province, and in Qingdao, a port city in eastern China’s Shandong Province. Natural Mill’s official website doesn’t carry information about how many stores there are in China or elsewhere.

Muji’s net profit for the second quarter, which ended Aug. 30, fell in China to 8.56 billion yen (about $76.2 million) from the first quarter’s $9.54 billion yen (about $85 million), according to an Oct. 9 article by China’s state-run daily Global Times that cited data from Muji’s financial report. Revenue in China for the fiscal first half was down by 0.2 percent, even as the retailer has reduced prices in China nine times within four years.

Images uploaded by netizens show that Natural Mill stores have interior decorations that are nearly identical to Muji’s, while offering almost identical product lines which have similar product designs.

Many netizens questioned the products’ authenticity and quality. One comment cited in the AM730 article says, “After looking at their products’ imperfections, the quality is like garbage.” Another netizen questioned why Chinese authorities haven’t stepped in to deal with the stores’ copyright infringement.

On Sina Weibo, China’s equivalent to Twitter, one netizen from Beijing wondered whether there would be a reward for reporting knockoffs to authorities.

The Natural Mill stores are operated by a private company, Beijing Cottonfield Textile Corp., which ironically, filed a trademark-infringement lawsuit against Ryohin Keikaku Corp. and its Chinese-registered company Muji (Shanghai) Commerce Corp., in 2016, according to AM730.

The lawsuit, heard by Beijing Intellectual Property Court on Sept. 28, 2016, demanded that Ryohin Keikaku and Muji (Shanghai) pay over 2.5 million yuan ($359,925) for infringement on its “Wu Yin Liang Pin” trademark. The company claimed that it had obtained a Chinese trademark license for its name in 2001; Muji started operating in China in 2005.

Ultimately, the court ruled in favor of Beijing Cottonfield in December 2017, and Muji was ordered to pay compensation fees of 1.0282 million yuan (about $148,000). In response to losing the lawsuit, Muji decided to sell products in China only under its English name “Muji.”

Muji again ran afoul of the Beijing regime in May. The company was fined 200,00 yuan (about $28,800) for using packaging that listed Taiwan as a separate country from China, according to Reuters.

After China’s civil war in 1949, members of the Kuomintang retreated to Taiwan following defeat by the CCP. Since then, mainland China has been under authoritarian, one-party rule, while the island of Taiwan has transitioned into a full-fledged democracy with its first direct presidential election in 1996.

Relations between the two are fraught, as Beijing considers Taiwan a renegade province that must be reunited with the mainland one day, with military force if necessary.

Muji isn’t the only company that has seen its business in China negatively affected after being punished by CCP because of sensitive issues.