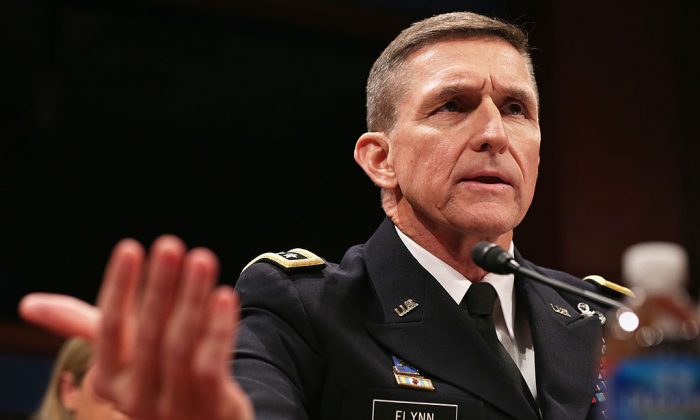 Lt. Gen. Michael Flynn, director of the Defense Intelligence Agency, testifies during a hearing before the House (Select) Intelligence Committee on Capitol Hill in Washington, D.C., on Feb. 4, 2014. (Alex Wong/Getty Images)
US News

ALEXANDRIA, Va.—Prosecutors from the team of former Special Counsel Robert Mueller dismissed the fact that they lacked the testimony of Gen. Michael Flynn during the trial of a former partner in Flynn’s consulting firm for undisclosed lobbying on behalf of Turkey.

Flynn, former national security adviser to President Donald Trump, wasn’t charged in the case as part of his plea deal. He was expected to testify for the Mueller team on the case, but the prosecutors withdrew his testimony after his new lawyers made clear that he wouldn’t say what they wanted him to.

During the closing arguments on July 22, the defense accused the Mueller team of a lack of transparency for not calling on Flynn to testify. Assistant U.S. Attorney James Gillis retorted by saying that Flynn’s testimony wouldn’t have helped the jurors decide the case anyway. He pointed out that the defense could call on Flynn just as well, but didn’t.

The case alleges that Bijan Rafiekian, former partner in the now-defunct Flynn Intel Group (FIG), and Ekim Alptekin, a Turkish businessman, conspired to lobby in the United States on behalf of Turkey without disclosing it to the U.S. government.

In June, the Mueller team asked Flynn to testify that he signed the lobbying forms in full knowledge that there were false statements in them and that he intended for the false statements to be there. Flynn refused, saying he only acknowledged the falsities with hindsight and wasn’t aware of them at the time.

That angered Brandon Van Grack, one of Mueller’s main prosecutors, according to Flynn’s lawyers.

Shortly after, the Mueller team called off Flynn’s testimony.

Gillis focused in his closing argument on the conspiracy charge, telling the jury that even though FIG ultimately registered as a foreign agent for Turkey in March 2017, by that time “fat was already in the fire” since Flynn already had an op-ed published in The Hill in November 2016, which the Mueller team alleges was the smoking gun of undisclosed lobbying for Turkey.

The op-ed argued for the extradition of an Islamic cleric living in exile in Pennsylvania named Fethullah Gulen, who runs a group that Turkish President Recep Tayyip Erdogan blamed for an attempted 2016 coup.

Gulen was also the target of a $500,000 lobbying job that FIG was hired for by Alptekin.

Alptekin, former chair of the Turkey-U.S. Business Council, is known to have ties to the Turkish government. In emails and Skype messages, Alptekin told Rafiekian that he was meeting Turkish cabinet members to discuss the lobbying project and two Turkish ministers even met with FIG and Alptekin in New York in September 2016.

The case seemed to be on the brink of getting thrown out on July 18. District Judge Anthony Trenga in the end allowed it to continue, despite noting that much of it rested on “very, very circumstantial” evidence.

The jury will start its deliberations on the morning of July 23.

Flynn, former head of the Defense Intelligence Agency, pleaded guilty in November 2017 to one count of lying to the FBI in an unrelated case. The Mueller team recommended a low sentence, including no jail time for him after he extensively cooperated with the Justice Department on multiple investigations.

His lawyer, Sidney Powell, has been attending the Rafiekian trial but declined to comment while the jury is out.

Rafiekian, an Iranian-American, was a board member of the Export–Import Bank of the United States from 2006 to 2011.