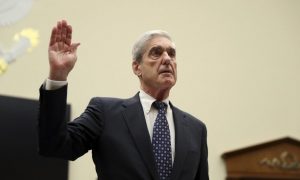 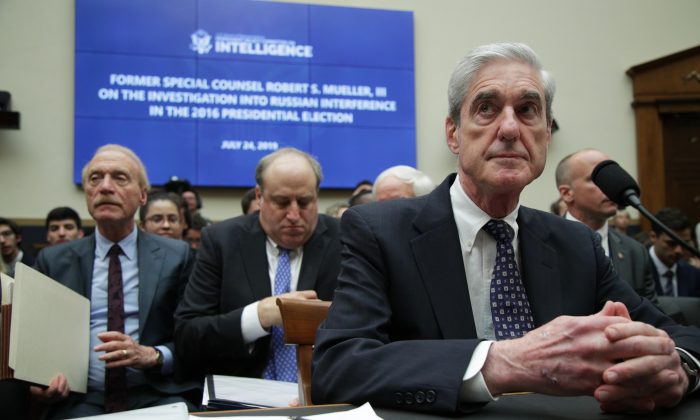 Former Special Counsel Robert Mueller testifies before the House Intelligence Committee about his report on Russian interference in the 2016 presidential election in the Rayburn House Office Building in Washington on July 24, 2019. (Alex Wong/Getty Images)
Politics

Former special counsel Robert Mueller on July 24 refused to answer House Republicans who pressed him about the origins of the Russia probe, the perceived double standard employed by his staff, and other longstanding mysteries of Mueller’s 22-month investigation.

Mueller wouldn’t say why his office didn’t bring perjury charges against Maltese professor Joseph Mifsud, the man whose conversation with Trump 2016 presidential campaign associate George Papadopoulos is at the alleged origin of the investigation. Mueller declined to answer any questions about the infamous, unverified Steele dossier and whether he could definitively say that the document wasn’t part of a Russian disinformation campaign.

The former special counsel also dodged questions about avenues of the investigation that pointed to Hillary Clinton’s 2016 presidential campaign.

In testimony before two House committees, Mueller likewise gave no new material to Democratic lawmakers, who methodically cited sections from the special counsel’s report in a bid to build a case for impeachment before the American public. On more than one occasion, Democrats pointed to portions of the final report to suggest that President Donald Trump obstructed justice, only to be reminded by Mueller that he would agree only to what’s already in the report.

Mueller, who concluded his investigation in late May, was unable to establish that Trump or anyone on his campaign colluded with Russia to influence the 2016 election. The former special counsel decided to not make a decision about whether the president obstructed justice; Attorney General William Barr concluded that the evidence presented in the report was insufficient to return an obstruction charge.

Rep. Steve Chabot (R-Ohio) asked Mueller about Fusion GPS, the firm that hired former British spy Christopher Steele to compile the opposition research dossier on Trump, which was paid for by the Clinton campaign and the Democratic National Committee. While retaining Steele, Fusion GPS worked on behalf of Moscow with Natalia Veselnitskaya, the Russia lawyer who attended the Trump Tower meeting referenced in Mueller’s report.

“That’s outside my purview,” Mueller said. The former FBI head repeated the same phrase throughout the hearing.

“I can’t get into internal deliberation about who would or would not be charged,” Mueller said.

Rep. Matt Gaetz (R-Fla.) asked Mueller whether the special counsel’s office investigated if Steele’s dossier was a tool of Russian disinformation; Steele paid second- and third-hand sources with ties to the Kremlin for the information in the dossier. Barr had previously told Congress he could not state with confidence if the dossier was not part of Russia’s election-meddling operation.

“Can you state with confidence the Steele dossier was not part of Russia’s disinformation campaign?” Gaetz asked.

“With regard to Steele … that’s beyond my purview,” Mueller responded.

“It’s exactly your purview,” Gaetz shot back. “The organizing principle was to fully investigate Russia’s interference.”

While Republicans on the Judiciary Committee used their five-minute slots to point out gaps in the credibility and objectivity of the special counsel’s investigation, Democrats largely stuck to the script of building a case for obstruction of justice. The lawmakers focused on five of the 10 instances of alleged obstruction of justice by the president, without mentioning that Barr decided that the evidence in Mueller’s report was insufficient to bring charges.

Mueller’s appearance on July 24 is likely the final act of the special counsel saga. Trump has consistently derided Mueller’s investigation and continued to do so before and during the final appearance.

“So Democrats and others can illegally fabricate a crime, try pinning it on a very innocent President, and when he fights back against this illegal and treasonous attack on our Country, they call It Obstruction? Wrong! Why didn’t Robert Mueller investigate the investigators?” Trump wrote on Twitter early on July 24, likely referring to senior FBI officials involved in investigating his campaign.

So Democrats and others can illegally fabricate a crime, try pinning it on a very innocent President, and when he fights back against this illegal and treasonous attack on our Country, they call It Obstruction? Wrong! Why didn’t Robert Mueller investigate the investigators?

Two FBI officials, Peter Strzok and Lisa Page, exchanged text messages expressing animus toward Trump and support for Clinton while investigating the Trump campaign. Strzok and Page discussed an “insurance policy” in the event Trump was elected, spoke of stopping him from becoming president, and brought up impeachment around the time they joined Mueller’s team.

Among several minute revelations during the testimony, Mueller challenged Trump’s claim that the president interviewed him for the FBI director position the day before Deputy Attorney General Rod Rosenstein appointed Mueller as the special counsel. Trump promptly responded on Twitter, claiming to have witnesses as to what transpired that day.

“Hope he doesn’t say that under oath in that we have numerous witnesses to the interview, including the Vice President of the United States!” Trump wrote.