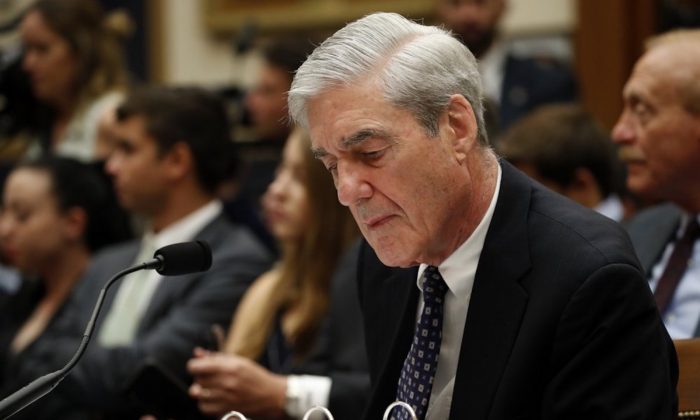 Former special counsel Robert Mueller looks at notes as he testifies before the House Judiciary Committee hearing on his report on Russian election interference, on Capitol Hill in Washington on July 24, 2019. (Alex Brandon/AP Photo)
Trump Administration

Robert Mueller, the former special counsel, admitted during testimony that he was friends with former FBI Director James Comey.

He first stated to Rep. Louie Gohmert (R-Texas) that he and Comey were “business associates.” After he was pressed by Gohmert, he said he and the former FBI chief were “friends.”

Gohmert then blasted Mueller, saying that he dragged out the probe into whether Russia interfered with the 2016 election.

“So you also note in the report that an element of any of those obstructions you referenced requires a corrupt state of mind, correct?” Gohmert asked him during the July 23 House Judiciary Committee hearing.

“Right, and if somebody knows they did not conspire with anybody from Russia to affect the election, and they see the big Justice Department with people that hate that person coming after them, and then a special counsel appointed who hires dozen or more people that hate that person, and he knows he’s innocent, he’s not corruptly acting in order to see that justice is done. What he’s doing is not obstructing justice, he is pursuing justice, and the fact that you ran it out two years, means you perpetrated injustice,” Gohmert then said.

The representative then asked Mueller, a former FBI director himself, about who wrote a speech he read at a May 29 press conference. Mueller wouldn’t reveal who wrote it.

The exchange between Mueller and Gohmert highlighted the deep Congressional divide over Trump and the Mueller investigation.

Democrats hoped the testimony would put pressure on President Donald Trump’s reelection campaign or whether they could pursue impeachment. During the hearing, several Democrats highlighted Mueller’s Vietnam service, his job as FBI director, and his lengthy service in the federal government.

In the hearing, Republicans defended Trump and criticized Democrats for going after him. Meanwhile, they focused on Mueller’s conclusion of insufficient evidence between Moscow and Trump’s campaign.

In the hearing, Mueller gave one-word answers and often wouldn’t answer questions while referring to his report itself. Numerous times, he asked for questions to be repeated.

Wednesday’s first hearing before the Judiciary Committee focused on whether the president illegally obstructed justice by attempting to seize control of Mueller’s investigation.

The special counsel examined nearly a dozen episodes, including Trump’s firing of Comey and his efforts to have Mueller himself removed. Mueller in his report ultimately declined to state whether the president broke the law, saying such a judgment would be unfair in light of Justice Department legal opinions that bar the indictment of a sitting president.