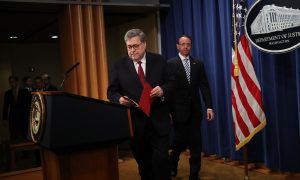 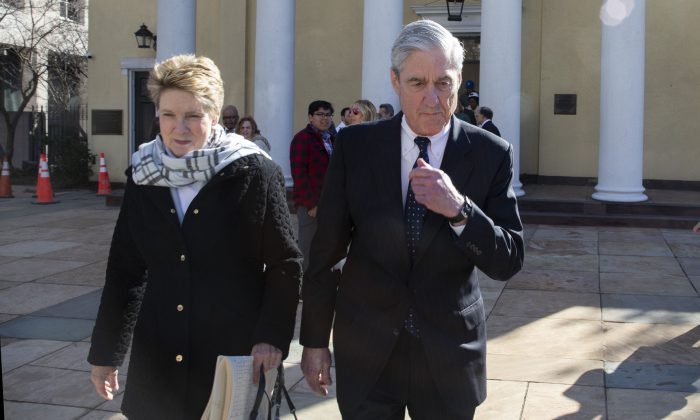 In addition to clearing President Donald Trump of all allegations of colluding with Russia, special counsel Robert Mueller’s final report removed any remaining credibility from the infamous Steele dossier, which fueled some of the wildest speculations about alleged ties between Trump, his associates, and the Kremlin.

The public first became of the aware of the dossier and its contents on Jan. 10, 2017, after BuzzFeed News published the document online without verifying any of its contents. In the more than two years since the dossier’s publication, the unverified claims have served as the foundation of the Trump–Russia narrative generated by the legacy media, anti-Trump politicians, and Obama administration officials.

As more evidence surfaced challenging the credibility of the dossier, including the fact that it was funded by Hillary Clinton’s 2016 presidential campaign, Trump’s opponents clung to the dossier hoping that Mueller’s investigation would blow open the seditious conspiracy outlined by the dossier’s author, former British intelligence officer Christopher Steele.

But instead of nailing Trump, Mueller’s 400-page report hammered the final nail in the coffin of the dossier. The Epoch Times cross-referenced 103 specific damaging claims related to Trump and his campaign in the Steele dossier against the special counsel’s report. The report did not confirm, nor provide, any evidence for any of the claims.

The bureau used the dossier to obtain a Foreign Intelligence Surveillance Act (FISA) warrant to spy on former Trump campaign associate Carter Page for over a year, starting in October 2016. Upon their partial declassification last year, the FBI’s FISA applications revealed that the bureau repeated some of the central claims in the dossier to accuse Page of being a Russian agent. Page never was charged with a crime.

The declassification of the Carter Page FISA documents was especially damaging to the small group of FBI officials who started the investigation of the Trump campaign in late July of 2016. Before the documents were declassified, the House Intelligence Committee had already completed a year-long investigation that concluded that the dossier was funded by the Clinton campaign and the Democratic National Committee (DNC). The FBI officials involved in the cases failed to disclose the political nature and origin of the dossier in the FISA application.

Led by then-Chairman Devin Nunes, the House Intelligence Committee also uncovered that Steele was biased against Trump, spoke to the media in violation of FBI guidelines for confidential human sources, and concealed his contacts with reporters until after the bureau obtained the first 90-day warrant to surveil Page. The problematic nature of the media contacts surfaced in the FISA application itself. The committee determined that the FBI used a Yahoo News article to corroborate Steele’s claims even though the article was sourced from a leak by Steele himself.

Beyond the House Intelligence investigation, the credibility of Steele’s dossier suffered several major blows in the lead-up to the release of the Mueller report. In British court filings, Steele admitted that the DNC and the Clinton campaign hired him to create the dossier so that the DNC and the Clinton campaign “could consider steps they would be legally entitled to take to challenge the validity of the outcome of [the 2016 presidential] election.”

Meanwhile, Yahoo News reporter Michael Isikoff, whose article the FBI used to improperly corroborate the Steele dossier, said in an interview that there is no evidence to substantiate the dossier’s central claim of collusion between the Trump campaign and Russia.

Then-FBI Director James Comey came to a similar conclusion when he was fired from the FBI in May 2017. Comey told congressional investigators late last year that the dossier still wasn’t verified by the time he left the bureau.

While the issues with the dossier cast a shadow over the FBI’s investigation, little is known about what Mueller did with the dossier once he was appointed to take over the investigation in May 2017. Given the intensity and thoroughness of the investigation—Mueller interviewed 500 witnesses and issued 2,800 subpoenas—it is virtually impossible that the special counsel’s investigators didn’t attempt to verify the claims in the dossier. A cursory overview of key names and events suggests attempts were made, but yielded no evidence.

The 103 claims in the dossier mention a short list of Trump associates—Page, former Trump campaign aide Paul Manafort, Lt. Gen. Michael Flynn, and former Trump lawyer Michael Cohen—all of whom became the targets of Mueller’s investigation. Mueller indicted Flynn, Cohen, and Manafort on a broad range of charges, none of which were related to any of the material in the dossier or the allegation that the campaign colluded with Russia.

The details of the Cohen cases specifically suggest that Mueller’s team followed leads from the dossier. The early installments of the dossier allege that Russia offered Trump various lucrative real estate development opportunities as part of a campaign to cultivate him. In later installments, Steele alleged that Cohen became a key liaison between the Trump campaign and the Kremlin after Manafort’s resignation. As is evident from the charges against Cohen and the final report by the special counsel, Mueller’s team investigated Trump’s ultimately scrapped real estate deal in Moscow, but found no evidence of collusion. Cohen pleaded guilty to lying to Congress about the timing surrounding the deal and his communications about it.

As part of the central claims targeting Trump and his associates, the dossier outlined an effort by Russia to sow discord in the 2016 presidential election to help Trump win. Mueller concluded that Russia did attempt to interfere in the election, but that there is no evidence to establish that either Trump or any U.S. citizen knowingly conspired with Moscow.