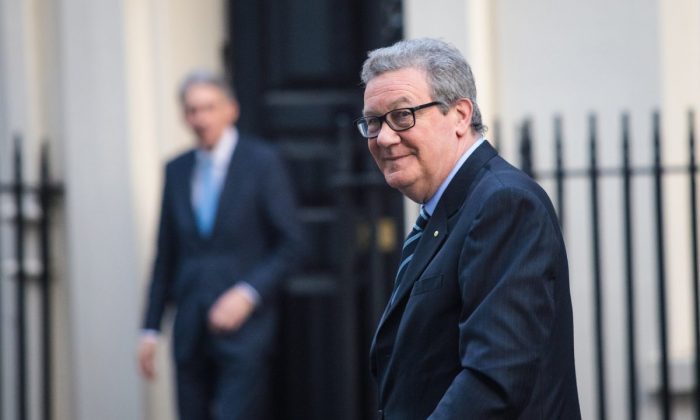 A redacted version of Robert Mueller’s report made public on April 18 devoted 14 pages to former Trump adviser George Papadopoulos, who had an infamous London bar meeting with then Australian high commissioner to the UK Alexander Downer.

Without naming the Australian government, the highly-anticipated report by U.S. Special Counsel Robert Mueller details the role of a “foreign government” in sparking the FBI’s 2016 investigation into whether Donald Trump’s election campaign co-ordinated with the Russian government.

UK, Australia Have Reason to Be Concerned About Declassification

Trump said in September 2018 that  “key allies” had asked him not to release classified FBI documents related to the probe into Russian influence in the 2016 presidential election, underlying the sensitive nature of what happened in the lead up to the FBI’s investigation. This raised speculation that the Australian and UK governments could be exposed.

I met with the DOJ concerning the declassification of various UNREDACTED documents. They agreed to release them but stated that so doing may have a perceived negative impact on the Russia probe. Also, key Allies’ called to ask not to release. Therefore, the Inspector General…..

Despite Downer’s strong rejections, Papadopoulos claims that the former Australian foreign affairs minister recorded a meeting they had at the Kensington Wine Rooms in May, 2016, and was acting as a spy.

“Alexander Downer will go down in history as a stooge for (Hillary) Clinton who single-handedly caused irreparable damage between the USA-Australia,”Papadopoulos tweeted on Sept. 21, 2018. “Congrats, buddy.”

The Mueller report also does not name Downer, referring to “a representative of that foreign government.”

Downer said on April 18 that he had not read the Mueller report.

“Haven’t seen it and don’t follow those issues,” he told AAP.

Mueller devotes 14 pages of his 448-page report to Papadopoulos.

Downer acknowledged in an interview with The Australian newspaper last year that he had met with Papadopoulos at a London bar. Downer claims that Papadopoulos told him during that meeting that Russia had political dirt on Trump’s then-presidential rival, Hillary Clinton, and that they might use that “damaging” material in the lead-up to the election.

Downer said he passed the highly-sensitive information back to Canberra “the following day or a day or two.”

How the information was then transferred to the FBI or U.S. intelligence agencies is not clear, but according to the Mueller report, was what “prompted the FBI on July 31, 2016, to open an investigation into whether individuals associated with the Trump Campaign were co-ordinating with the Russian government in its interference activities.”

Papadopoulos, however, says he has no memory of saying anything about Russian dirt on Clinton to Downer, saying that actors within Australian and British intelligence had entrapped him.

Mueller’s report describes how Papadopoulos had learned that the Russians had obtained ‘dirt’ on candidate Hillary Clinton from Maltese Professor Joseph Mifsud during a meeting Mifsud arranged in London on April 26, 2016.

“After reports are finally out that the British and Australian governments were actively spying and trying to sabotage the Trump campaign, those two governments called the president to ask for him not to declassify any FISA documents,” Papadopoulos wrote on Twitter last year. “Strange.”

It was that FBI investigation that eventually led to Mueller being appointed as special counsel to investigate Russian interference.

“Papadopoulos and the Campaign officials with whom he interacted told the Office that they did not recall that Papadopoulos passed them the information,” the report states.

Mueller’s 22-month investigation found there was insufficient evidence to establish Trump or his associates engaged in a criminal conspiracy with Russia to disrupt the 2016 election.

Papadopoulos was one of Mueller’s first prosecutions.

Papadopoulos entered a guilty plea in 2017 to lying to the FBI about the extent of his contacts with Russian nationals and Mifsud, who he called “a nothing.” He was later sentenced to 14 days in prison.

Papadopolous has since released a book called “Deep State Target” detailing his account of his interactions with Downer, Trump, Mifsud and others.

By Peter Mitchell, AAP US Correspondent. With additional reporting by Epoch Times staff.