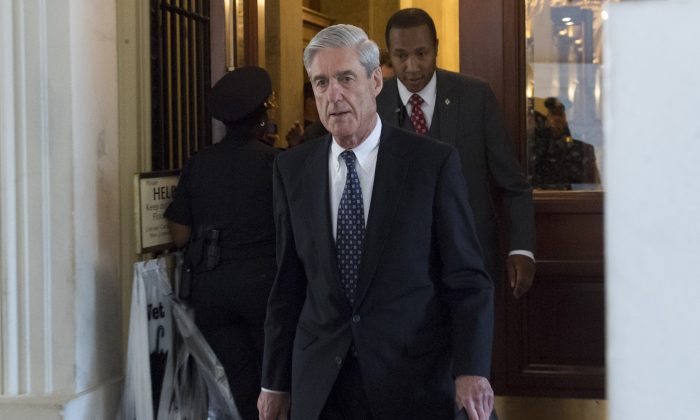 Special Counsel Robert Mueller offered limited immunity to five potential witnesses in the case against campaign consultant Paul Manafort. One of the witnesses is Tony Podesta, according to unnamed sources, though this claim is inconsistent with court documents.

It’s not clear when Mueller’s team struck the immunity deals, but on July 17 it asked the court to seal them, so that the potential witnesses won’t face “undue harassment” and “reputational harm,” court documents show.

Podesta being granted immunity was reported by Fox News’ Tucker Carlson on July 19, based on two anonymous sources.

Carlson’s sources diverge from information provided to the court by Mueller’s prosecutors, who stated the witnesses “have not been identified publicly with the case.” Podesta has been linked to the Manafort case, though only through anonymous sources.

The Special Counsel’s Office declined to comment. A spokeswoman for Podesta declined to speak on record.

Podesta’s lobbying firm, the Podesta Group, worked with Manafort and another lobbying firm, Mercury LLC, to boost the Ukrainian government’s image in the United States between 2012 and 2014. Podesta’s brother John was a campaign chair to Hillary Clinton’s 2016 presidential bid.

While Manafort has been charged with a failure to register as a foreign agent, the Podesta Group hasn’t.

The limited immunity offer, called use immunity, only covers a testimony to Mueller and doesn’t shield the witnesses from charges based on other evidence.

Mueller charged Manafort in two separate lawsuits (in October and February), saying he hid from authorities millions of dollars in payments from former Ukrainian President Viktor Yanukovych, dodging taxes in the process. He also allegedly lied to banks about his income to get better loans, lied to investigators, and failed to register as representing foreign interests.

Manafort joined the campaign of then-candidate Donald Trump in March 2016 and served as the campaign manager from June to August that year. He stepped down after The Associated Press revealed his previous work in Ukraine.

The Podesta Group’s CEO, Kimberley Fritts, said their work for Ukraine was paid by a nonprofit, which provided a signed statement affirming its independence from Ukraine’s government.

But one former Podesta employee anonymously told the AP that Manafort’s partner, Richard Gates, told them in 2012 that the nonprofit’s role was to supply funding that could not be traced to the Ukrainian politicians who were paying him and Manafort.

In October, Podesta quit his firm after news of the Ukraine work emerged. The firm virtually ceased to function that year.

Manafort and Gates, as well as the Podesta Group and Mercury ultimately registered as foreign agents in 2017.

Last month, Manafort was charged with witness tampering after he allegedly called and messaged a former associate to give him a “heads-up” about the work the two did connected to lobbying for Ukraine in Europe. The work may have also involved lobbying the U.S. government and Congress, according to court documents, which would have triggered the foreign agent registration requirement.

Manafort is scheduled for trial on July 25, 2018. Based on court documents, the five witnesses with immunity offers haven’t been charged in the case, but “will not testify or provide other information on the basis of their privilege against self-incrimination.”

Granting immunity is a way to compel a testimony, as a witness who then refuses to testify to a federal grand jury may be held in contempt.

Mueller’s team only asked to keep the immunity motions sealed until the witnesses are actually called to testify, because their identities would then likely become public anyway.

Lobbyists are rarely punished for failing to register as foreign agents. In the past half a century, there have only been a handful of cases.

Manafort’s lawyers said the charges against him are politically motivated as his activities have been known to authorities for years, but only prosecuted after he joined the Trump campaign.

Mueller was appointed a year ago to take over a previous FBI counterintelligence probe into Russian meddling with American elections and whether the Trump campaign “colluded” with the meddling.

The Manafort charges are especially far removed from Mueller’s original mandate, but Deputy Attorney general Rod Rosenstein issued a memo on Aug. 2, 2016, that, in its unredacted part, specifically authorizes Mueller to investigate Manafort’s work in Ukraine.

That didn’t stop Mueller from having Manafort’s home raided a week earlier. The raid was authorized based on allegations about his work in Ukraine.

President Trump has called the Mueller investigation a “witch hunt.” Last month, he questioned why the FBI didn’t tell him back in 2016 that Manafort was being investigated for his past business.

“We should have been told that [then-FBI Director James] Comey and the boys were doing a number on him, and he wouldn’t have been hired!” Trump wrote on Twitter on June 3.