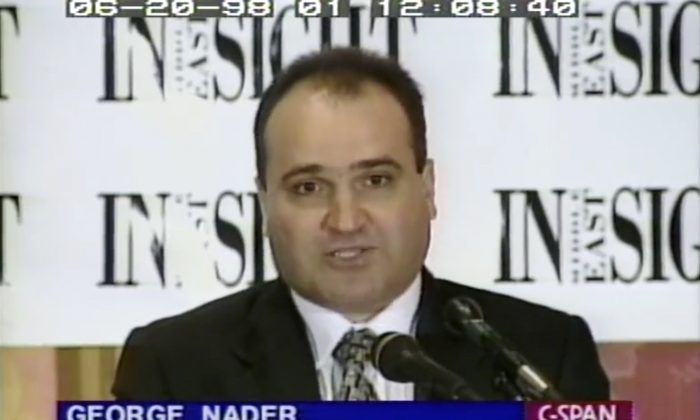 George Nader—a witness in then-special counsel Robert Mueller’s investigation and charged in a case involving foreign donations—pleaded guilty on Jan. 13 on charges of sex trafficking and possessing child pornography, and will now serve at least 10 years in prison.

The 60-year-old entered a guilty plea in a federal court in Alexandria, Virginia, the U.S. Attorney’s Office for the Eastern District stated in a press release on Jan. 13.

Nader admitted to transporting a 14-year-old from “Europe to Dulles International Airport [in Virginia] for purposes of illegal conduct” in the early 2000s. Nader also admitted that he possessed child pornography while he was in New York in September 2012, the office stated in the release.

“In exchange for the plea, the government agreed to dismiss an indictment involving similar charges returned in the Eastern District of Virginia in July 2019,” the U.S. Attorney’s office wrote.

“Actual sentences for federal crimes are typically less than the maximum penalties. A federal district court judge will determine any sentence after taking into account the U.S. Sentencing Guidelines and other statutory factors,” the release said.

It noted that Nader, who is Lebanese American, was previously convicted of transporting child pornography in Virginia in 1991.

Nader’s name shows up a number of times in Mueller’s report, which investigated whether Donald Trump’s presidential campaign coordinated with Russia during the 2016 election. The final report submitted by Mueller’s office in early 2019 found no evidence that the campaign “coordinated or conspired with the Russian government in its election-interference activities.”

Nader was charged in a 2019 case involving foreign donations to Hillary Clinton’s 2016 campaign. He pleaded not guilty to those charges.

Prosecutors had alleged that Nader and other defendants funneled money via a donor from the Middle East to Clinton, reports stated. Those charges aren’t related to the child pornography case in Virginia.

According to his lawyers, Nader was hired as a contractor for the Department of Defense, and he was also hired as an adviser on the Middle East during the Bush administration, reported the National Review.

The U.S. Attorney’s office added that the Nader “case was brought as part of Project Safe Childhood, a nationwide initiative launched in May 2006 by the Department of Justice to combat the growing epidemic of child sexual exploitation and abuse.”