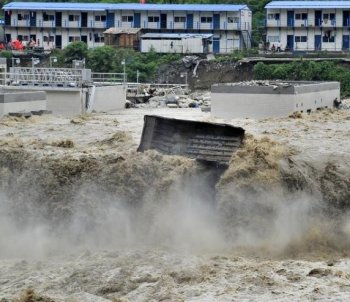 A sudden mudslide blocked Min River in the once earthquake-stricken Yingxiu Township in Wenchuan County, Sichuan Province. (Photo provided by a source inside China)
China

Starting Aug. 12, parts of Sichuan province experienced continuous torrential rains that triggered large scale mudslides in 10 cities and 24 counties. About 5.76 million people were affected and 400,000 local residents had to be evacuated, according to a report by China News Services on Aug. 17. Official death toll is said to be 13, and 59 missing.

In the early morning of Aug. 13, a mudslide triggered by flash floods devastated Qingping Township, a suburb of Mianzhu City in northwestern Sichuan Province, an area that had been heavily damaged by the 2008 Wenchuan earthquake. The five million cubic meter mudslide altered the route of the Mianyuan River, forming a barrier lake, and turning Qingping Township into an isolated island without supply of water and electricity. Road traffic and telecommunication were also at a complete halt.

The mudslide also swallowed five villages in the area, affecting about 6,000 residents. Official media reported only nine confirmed deaths and five people missing by the night of Aug. 16.

The massive mudslide also caused the water from Mianyuan River to reach the new homes built after the earthquake. Many of the houses were completely buried by water and mud.

Mr. Chen, a Qingping resident, told an Epoch Times reporter, “Even though the Mianzhu area mudslide does not seem to be as devastating as the Wenchuan earthquake of 2008, it has affected a very large area. Qingping and Tianchi Township are the most severely damaged. It is difficult to estimate the death toll at this point.”

Mr. Chen said that land transportation is the most urgent issue for Qingping because many people are trapped in the area, and the only means of taking the wounded out of Qingping has been by helicopter. Rubber dinghies have been almost useless.

Rescue helicopters brought small communication devices and electric generators along with rescue crews to the affected area. That was how communication with the outside was reestablished.

At Yingxiu in Wenchuan County, a stretch of the Duwen Expressway was destroyed by a mudslide. The mudslide also altered the course of the Min River, a tributary of the upper Yangtze River in central Sichuan Province, flooding Yingxiu Township and trapping tens of thousands of people.

Mr. Liu Yong, a rescue worker whose camp was situated on the highland across from the mudslide, told Guangzhou Daily: “When I ran outside, the new two-story houses in Yingxiu were already submerged by the Min River flood. Everywhere, people were calling for help.”

The 60,000 cubic meter mudslide also blocked the Min River at Yinxing, another nearby township in Wenchuan County, and formed a barrier lake there too.

Tao Qingfa, deputy director of the Department of Geological Environment of the Ministry of Land and Resources, told CCTV, “Because it is the rainy season, the danger of more mudslides is eminent. The debris from the already occurred mudslides has to float downstream, which will cause more geological disasters.”