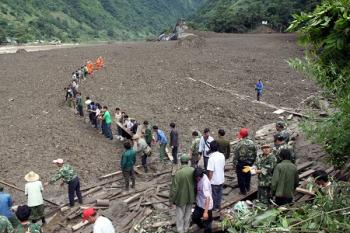 A large and sudden mudslide, close to 1,000 feet in width, hit Yunan Province in China’s southwest in the early hours of Aug. 18. Chinese media and state channels reported 90 missing and one dead, though a civil affairs official puts the figure at at least 60.

The mudslide occurred at Litoudi Village, 10.5 miles from Gongshan County, 6 miles from Puladi Township, according to state media.

The mudslide destroyed a stone bridge, covered roads, and interrupted both transportation and telecommunications.

After tearing down the village group Yuege, part of Litoudi, the torrent ran into the Nu River, causing blockages and leading the upstream water level to rise nearly 20 feet in Gongshan County.

According to a local Civil Affairs staff member, at least 60 people died from the disaster, reported Radio Free Asia. The 90 reported missing by the government will most probably not be recovered, an official said to RFA.

Local resident Mr. Yu, contacted by telephone, said to The Epoch Times that the death toll was closer to 70. “The mudslide flooded a mine site in Yuege and buried 7 or 8 houses. No one survived,” he said.

Accordingly, there was a call to the local government after the mudslide indicating a village had been completely buried.

“At dawn this morning everyone from our village started the rescue effort,” Mr. Yu said.

“The roads have been disrupted. Some roads are mountain paths. The situation is very bad,” He said.

The county where the mudslide took place is sloped to various degrees, and holds little flat ground. About 60 percent of the farmers reside in the hillside. It occupies 422 square kilometer, and is known as the South Gate of Gongshan.

Puladi Township has six rural committees, 56 village groups, 1914 households, and a total population of 6,572, according to a report on Zhongjin Online.

While Chinese officials have blamed the rain season, one local official believed that the disaster may have been related to mining in the area.

This was furthered by Hu Xingdou, a professor at the Beijing Institute of Technology, quoted by RFA.

“There are natural disasters and man-made calamities, and this [recent mudslide] is a case of both of them. For example, for a long time no attention has been paid to preserving the vegetation, and some places have been wildly excavated, damaging the water, soil, and geology.”