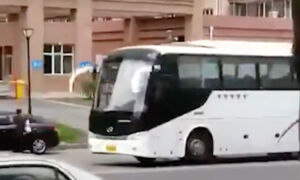 Mudanjiang City Locked Down for the Third Time

After Wuhan, Mudanjiang has become the second Chinese city to conduct mass nucleic acid screening. Authorities announced that 650,000 people in the urban area had been tested for the CCP virus from June 1 to June 7, with 19 people found to be asymptomatic. The local government reported a positive detection rate of 0.288 per 10,000. However, according to local netizens, the severity of epidemic control measures indicate that this round of outbreak could be very serious.