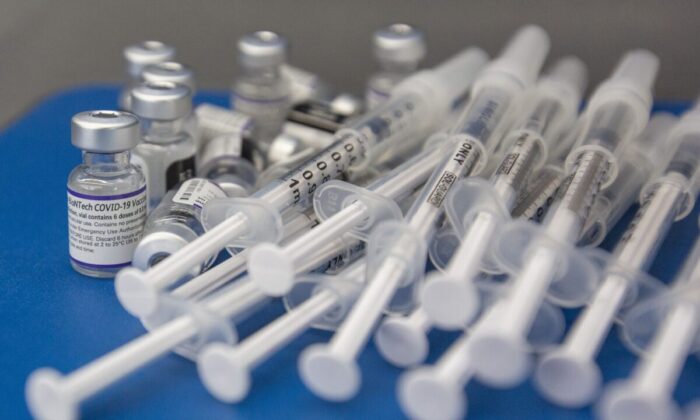 Syringes and vials of Pfizer-BioNTech COVID-19 vaccine are seen on a work surface during a drive-through clinic at St. Lawrence College in Kingston, Ont., on Dec. 18, 2021. (The Canadian Press/Lars Hagberg)
Canada

A team of experts from different fields, including medical statisticians and a medical anthropologist, has rebutted a recent article published in a Canadian medical journal that defends the use of COVID-19 vaccine mandates by claiming that a mathematical model shows unvaccinated people increase the risk of infection among the vaccinated.

“It is especially problematic that a modelling paper so detached from reality contains such explicit and strong condemnation of ‘the unvaccinated,’” said James Doidge, an epidemiologist and senior medical statistician with the UK’s Intensive Care National Audit & Research Centre, and his fellow contributors in a reply posted on the Canadian Medical Association Journal (CMAJ) website on April 28.

“The potential for this work to foster social division and misplaced anger and blame is at odds with public health ethics.”

The article the experts were responding to is titled “Impact of population mixing between vaccinated and unvaccinated subpopulations on infectious disease dynamics: implications for SARS-CoV-2 transmission,” and was published in CMAJ by a group of Canadian scientists on April 25.

The article argued that vaccinated people who mix with those who are not vaccinated have a significantly greater chance of being infected than those who stick with people who have received the shot.

In contrast, unvaccinated people’s risk of contracting COVID-19 drops when they spend time with people who are vaccinated, because vaccinated people serve as a buffer to transmission, according to the mathematical model used in the study.

The study concluded that the choice to get vaccinated can’t be thought of as merely personal but is something to be done collectively for the sake of public health.

Doidge and his team disagreed with the study’s conclusion. He argued in a tweet on May 1 that the model used in the study is “founded on an assumption that even the authors don’t believe.”

The medical experts said the article presented an “oversimplification of a complex epidemiological, social, and bioethical issue.”

“The findings are predetermined by the authors’ own model design choices; something that should never occur in science. That the authors make strong ethical and political claims that feed existing social polarization makes the flawed design even more problematic,” they said in their response.

The model categorizes people into three groups, namely susceptible to infection, infected and infectious, and recovered from infection with immunity. The study’s authors treated immunity after vaccination as an “all-or-none phenomenon,” which means people who receive the shots are assumed to enter the model in the immune state whereas those who didn’t will continue to be labelled as susceptible to infection.

The model does not take into consideration waning immunity, however.

“By ignoring waning immunity (from both vaccination and prior infection), the authors have constructed a model in which herd immunity always occurs, leaving some residual proportion of the population uninfected indefinitely,” Doidge and his team said, questioning how the omission of scientific facts would influence the outcome of the mathematical model.

The article additionally asserts that “nonvaccination is expected to result in amplification of disease transmission in unvaccinated subpopulations” and “heightens the risk of vaccinated populations,”—a theory the experts disagreed with.

“In this hypothetical scenario, it is a foregone conclusion that if one group with high baseline immunity is mixed with another group of lower baseline immunity then a greater proportion of the high-immunity group will become infected before herd immunity is achieved, than if they had not mixed,” they wrote. “This is nothing more than dilution.”

The experts argued that using the same logic, the model will produce a “flawed” conclusion should the immunity of the unvaccinated be set to a higher value in the calculation.

“The model contains two crucial parameters: ‘vaccine efficacy’ and ‘baseline immunity in unvaccinated.’ If these are set to any combination where the latter is higher, then the findings are reversed; the vaccinated increase risk for the unvaccinated. Obviously, both conclusions are similarly flawed,” they said.

Dr. Byram Bridle, a viral immunologist and associate professor at the University of Guelph, said the article is “only thinly veiled hate speech under the guise of science,” filled with “massive errors.”

“Most of the people that remain ‘unvaccinated’ are not ‘anti-vaccine’ by any stretch of the imagination,” said Bridle in his newsletter published on Substack on April 26.

“Due to critical thinking and following the science, they are not in support of the current crop of COVID-19 jabs. Remember, the definition of a vaccine was changed to accommodate these jabs. They are nothing like any of the historically mandated vaccines, such as those used in the childhood immunization series.”

Bridle said the article incorrectly assumes that COVID-19 vaccines offer full immunity against the virus and that the booster shots provide restored protection against the Omicron variant.

“Yet the ‘real world’ data clearly show that the boosted sub-population is being diagnosed with disproportionately more cases than the ‘not fully vaccinated’ group, which includes the ‘unvaccinated’ and people who received a single dose,” he said, citing the number of COVID-19 cases by vaccination status from the website of the Ontario Ministry of Health on April 26.

“Why would someone want to take a booster and more than double their risk of getting diagnosed with COVID-19?!?”

Bridle also noted that the article did not mention the safety issues surrounding the vaccines, and that it assumed the baseline immunity among the unvaccinated to be only 20 percent when another peer-reviewed paper “estimate[d] that between 90 percent and 99 percent of adults show positive antibody reactivity for SARS-CoV-2 spike, RBD, or the N antigen.”

Doidge and his team said the authors not only did not consider the “vast difference” in health-care demand between an 18-year-old and a comorbid 80-year-old in the modelling, but their calls for vaccine mandates failed to acknowledge that these same policies “helped to ignite nation-wide protest.”

“The combination of deeply flawed modelling, moral condemnation, and politicisation should be sufficient to retract a paper published in Canada’s preeminent medical journal,” they said.

“Unfortunately, the damage has already been done, with many media outlets added fuel to the fire through uncritical reporting of this study. Trust in public health and science has been further eroded.”