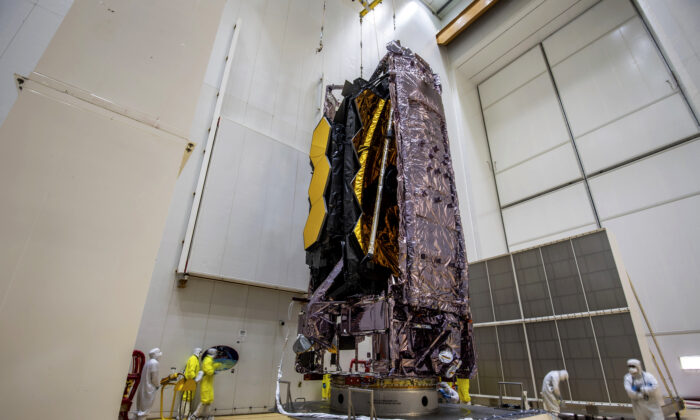 NASA’s James Webb Space Telescope is secured on top of the Ariane 5 rocket that will launch it to space from Europe’s Spaceport in French Guiana, in this photo released by the European Space Agency, on Dec. 11, 2021. (M.Pedoussaut/ESA via AP)
Science News

Scientists are targeting a launch no earlier than Dec. 24 for the much-delayed successor to Hubble, the next-generation James Webb Space Telescope.

The telescope arrived at Europe’s spaceport in Kourou, French Guiana, in October, a significant hurdle on its long journey to launch.

Launched in 1990, the Hubble telescope is showing more and more signs of aging, despite a series of repairs and updates by spacewalking astronauts during NASA’s shuttle era.

Back in 2003, concerned scientists and a select panel of astronomers met in Washington, D.C., to discuss the future of Hubble and the status of the next round of space telescopes, including James Webb.

Back then, the plan then was to launch James Webb in 2011.

“I think the hard question is, ‘How long can we keep Hubble going?’ because Hubble is up there and it’s working beautifully, but we know that it’s complex and it wears out with time,” said senior project scientist John Mather back in 2003.

“It’s difficult and expensive and risky to put repairs up there. But it’s been done well many times, and we can do it again, but it takes a lot of thought and planning to do that well.”

Originally supposed to fly more than a decade ago, the $10 billion telescope’s launch has faced countless delays.

A recent seven-month delay was attributed to the pandemic and technical issues. The outbreak slowed work on the telescope by prime contractor Northrop Grumman in Southern California.

In 2016, Mather was present to declare the next-generation space telescope complete.

“We have done two decades of innovation and hard work, and this is the result. We are opening up a whole new territory of astronomy,” he said at the time.

The telescope is named after NASA’s second administrator, James Webb.

“James Webb said science is the future, that would be his legacy to this agency,” said then NASA administrator Charles Bolden.

The next-generation observatory, towering three stories tall, is designed to peer further into space and further back into time than any other spacecraft.

“I like to think of it as NASA’s vehicle for the deepest space exploration that humanity can do,” said Eric Smith, the telescope’s program director and program scientist.

“It will allow us to see farther back in time, to the time when the very first stars and galaxies were being born.

“Additionally, it’s different from Hubble in that it’s an infrared optimized telescope. And so, this means it will allow us to peer through clouds of gas and dust in our own galaxy, where stars and planets are being born today.”

Set to soar on a European Ariane rocket, Webb is destined for a point 1 million miles (1.6 million kilometers) from Earth, well beyond astronauts’ reach.

The orbiting Hubble Space Telescope, by contrast, was repeatedly serviced by shuttle astronauts following its 1990 launch.

In October, the telescope arrived at Europe’s spaceport in Kourou, French Guiana, a significant hurdle on its long journey to launch.

Experts say another significant obstacle to beginning scientific operations will come after launch, during a six-month commissioning period, when the spacecraft will unfold its mirror, sunshield, and other smaller systems.

It will take about one month to fly to its intended orbital location almost 1 million miles away from Earth.

During this time, it will slowly deploy its five-layer sun shield, about the size of a tennis court.

“We’ve built a world-class infrared telescope. We’ve built it, we’ve aligned it, we’ve tested it, and we’ve proved it worked. Now, we’re going to have to break it up, fold it up, and actually rebuild it on orbit, rebuild it, realign it, retune it, and get it to work robotically on orbit,” said lead mission systems engineer Mike Menzel.

“That’s never been done before.”