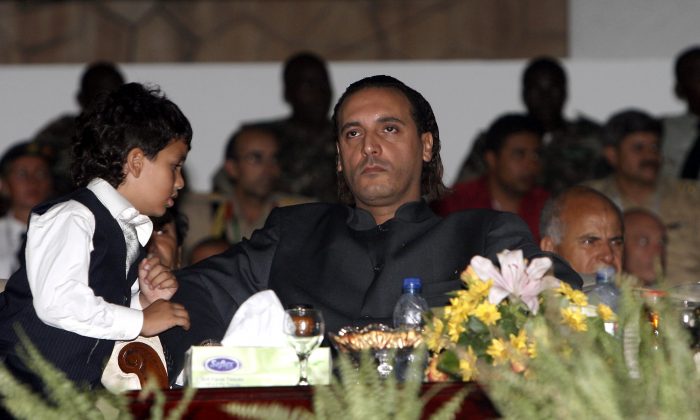 The son of former Libyan strongman Muammar Gaddafi was reportedly kidnapped in Lebanon.

Al-Jadeed TV broadcast a video of the younger Gaddafi, and it uploaded it on YouTube.

The BBC reported that Hannibal Muammar Gaddafi, 40, was kidnapped in Lebanon. The network cited security forces in the country.

He appeared in a video aired late Friday on local Al-Jadeed TV saying anyone who has information about Imam Moussa al-Sadr should come forward.

Gaddafi appeared to have been beaten up and had black eyes but said in the video he is “in good health, happy and relaxed.”

It was not clear when Gaddafi, who is married to a Lebanese woman, was kidnapped.

Here pic of Hannibal Gaddafi with bruises on his face. Not clear when exactly he was kidnapped. @akhbar pic.twitter.com/N1w3ftl3Bw

The AFP news agency reported that it might have been carried out by the Lebanese Amal Movement.

Al-Sadr, one of Lebanon’s most prominent Shiite clerics in the 20th century, vanished, along with two other people, during a trip to Tripoli in 1978. Lebanon blamed the disappearance on Muammar Gaddafi.

He fled with his wife, Aline Skaf, from Libya to Algeria after Libyan rebels entered Tripoli during the Libyan civil war in 2011. He left there to go to Oman in 2012. He was known for his lavish lifestyle. His wife was accused of severely abusing an Ethiopian maid–who was later found by rebels after the Gaddafi family fled the country–by throwing boiling water on her.

Hannibal Gaddafi, the son of the late Libyan leader Muammar Gaddafi has been kidnapped in #Lebanon by militants. pic.twitter.com/xsz19VlJkC

Under his father’s regime, Hannibal was a consultant to a Libyan maritime transport company. He was known as a “playboy” with a bad temper. In 2001, he reportedly attacked three Italian police officers with a fire extinguisher.

This is a breaking news report. More information will be included in this article it develops.