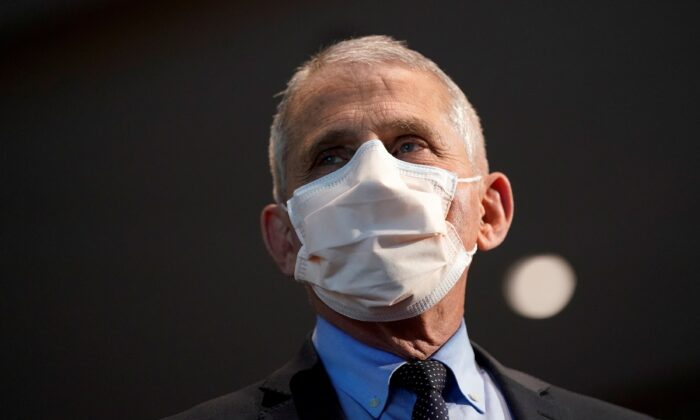 A variant of the virus that causes COVID-19 and is spreading in South America is not a problem for the United States right now, a top health official said Thursday.

The “Mu” variant, formally B.1.621, was classified as a variant of interest by the United Nations’ World Health Organization (WHO) this week.

It was first detected in Colombia in January. Since then, some larger outbreaks have been reported in South America and in Europe.

Early data indicate that it could cause a reduction in protection from COVID-19 vaccines, “but this needs to be confirmed by further studies,” WHO said in its weekly epidemiological report on COVID-19, the disease caused by the CCP (Chinese Communist Party) virus.

U.S. officials are aware of the variant and “keeping a close eye on it,” Dr. Anthony Fauci, told reporters in a virtual briefing on Thursday.

But the variant is not close to becoming prevalent in the United States at this time, according to genomic sequencing of CCP virus cases in the country.

“It is rarely seen here, but it is not at all even close to being dominant. As you know, the Delta is more than 99 percent dominant,” Fauci, a chief medical adviser to President Joe Biden and the longtime director of the National Institute of Allergy and Infectious Diseases.

Fauci also appeared to downplay the preliminary data that suggests the Mu variant evades certain antibodies, including those produced by vaccines.

“Remember, even when you have variants that do diminish, somewhat, the efficacy of a vaccine, the vaccines still are quite effective against variants of that type,” he said.

The prevalence in both Colombia and Ecuador of the strain has consistently increased over time, according to the WHO, now making up nearly 4 in 10 cases in the former and more than 1 in 10 in the latter.

“More studies are required to understand the phenotypic and clinical characteristics of this variant. The epidemiology of the Mu variant in South America, particularly with the co-circulation of the Delta variant, will be monitored for changes,” WHO said.

Francois Balloux, chair in computational biology and systems biology at the UCL university in London, said on social media on Thursday that the WHO likely elevated the Mu variant because of a recent uptick of cases of the variant in the United States.

“It’s not particularly concerning at this stage, but worth keeping an eye on,” he wrote.