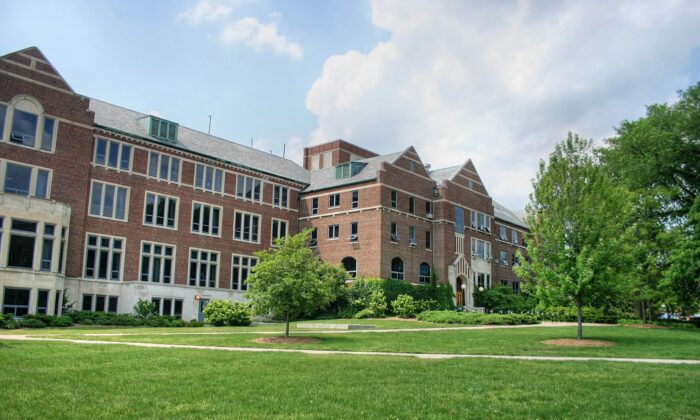 The MSU Union Building on the Michigan State University campus in East Lansing, Michigan on May 28, 2006. (Jeffness/CC BY-SA 2.5)
US News

The Office for Inclusion and Intercultural Initiatives of the East Lansing-headquartered school announced the launch of the “Undocumented Student Resources” microsite on Jan. 24.

An internal memo obtained by The Morning Watch, an independent conservative student newspaper at the campus, states the new web pages were created to “provide information and resources for undocumented students, refugees and recipients of the Deferred Action for Childhood Arrivals (DACA) program.”

DACA was created in 2012 by then-President Barack Obama by executive fiat after Congress refused to approve legislation authorizing it. Since its inception, the program has shielded from deportation 700,000 or more individuals brought to the United States as minors, and has become a flashpoint in American politics.

President Donald Trump tried to shut down DACA but was rebuffed by the federal courts. The Supreme Court heard the Trump administration’s challenge to the program on Nov. 12 but has yet to issue a ruling.

“MSU recognizes that students, staff and faculty with mixed-immigration status often face barriers and challenges as they navigate campus policies requiring support services to address their unique needs,” according to the memo.

“Our goal is to reduce apprehension, confusion, and make more transparent our resources for those who live, learn and work at Michigan State or desire admission to MSU.”

Although the word “apprehension” can refer to anxiety or fear that something bad will happen, in the context of illegal aliens it generally refers to the arrest or detention of those suspected of violating U.S. immigration laws.

Asked to explain what the university meant by the word “apprehension” in the “Undocumented Student Resources” web pages, MSU spokesperson Emily Gerkin Guerrant told The Epoch Times after press time, “In this context, the word is being used to describe anxiety or fear.”

A conservative student leader at the campus was upset that MSU created the microsite devoted to helping students present in the country without legal authorization.

“I am sickened to my stomach that my money is going to the education of those who broke the law,” Sam Larey, president of MSU chapter of Turning Point USA, told The Morning Watch.

“By aiding undocumented aliens, we spit in the face of immigrants who followed our laws,” Larey said.

In the Frequently Asked Questions (FAQs) section of the microsite, the university indicates that it does not honor detainer documents, or administrative warrants, from U.S. Immigration and Customs Enforcement (ICE).