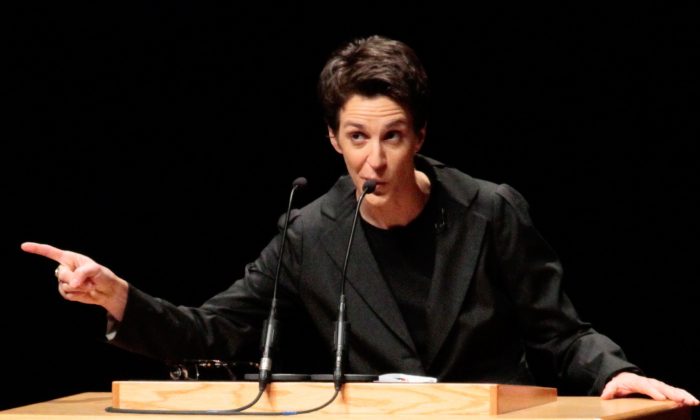 MSNBC host Rachel Maddow has been accused of misleading viewers after she failed to mention crucial details of reports clearing Donald Trump Jr. of suspicions regarding blocked calls made before and after his meeting with Russians at Trump Tower in 2016.

Maddow and “many of her guests” were suspicious that these blocked calls were made to President Trump during his 2016 presidential campaign, Caleb Howe explained in an op-ed he wrote for Mediaite on Monday, Feb. 4, titled, “Rachel Maddow’s Narrative on Don. Jr.’s ‘Blocked Calls’ Disappeared. She Forgot to Tell Her Audience.”

On “The Rachel Maddow Show,” Maddow wondered if Donald Trump Jr.’s calls were to his father, President Donald Trump. She also had Rep. Adam Schiff (D-Calif.) of the House Intelligence Committee on her show to add his speculations into the mix.

However, their “assumption turned out not to be the case.” Instead, last week nearly every major publication reported that the blocked calls Trump Jr. made were to business contacts and not to his father.

CNN reported that “three sources with knowledge of the matter told CNN” that “records provided to the Senate Intelligence Committee show the calls were between Trump Jr. and two of his business associates, the sources said, and appear to contradict Democrat’s long-held suspicions that the blocked number was from then-candidate Donald Trump.”

ABC News revealed that the names of the associates were from “two family friends—NASCAR CEO Brian France and real estate developer Howard Lorber.” ABC News obtained the names from “three sources familiar with the calls,” which came on June 6, and after the meeting on June 9. Other media outlets, such as The New York Times, also confirmed on their own.

Trump also took to Twitter to write, “Just out: The big deal, very mysterious Don jr telephone calls, after the innocent Trump Tower meeting, that the media & Dems said were made to his father (me), were just conclusively found NOT to be made to me. They were made to friends & business associates of Don. Really sad!”

Just out: The big deal, very mysterious Don jr telephone calls, after the innocent Trump Tower meeting, that the media & Dems said were made to his father (me), were just conclusively found NOT to be made to me. They were made to friends & business associates of Don. Really sad!

Despite the reports appearing to vindicate Trump Jr., it was “not hot enough for details on Rachel Maddow’s show,” Howe wrote. He also pointed out that Rep. Schiff was actually a guest on her show after the news broke.

“This is not MSNBC reporting and MSNBC hasn’t confirmed this, but they’re saying Senate investigators have obtained information about something that you have asked about in the past concerning Donald Trump Jr.,” Maddow told Schiff, without disclosing to her viewers that those reports contradicted her theory.

“Schiff not only didn’t indicate the reporting that it was not a father-song phone call, he implied that the open question remains to be investigated,” Howe wrote. “At no point does Maddow tell viewers what the ‘new reporting’ actually was. Maddow only says ‘this is not MSNBC’s reporting,’ but she doesn’t [say] whose reporting it is. For the record, it was CNN. And ABC News. And the New York Times.”

Howe noted that while speculation is common on cable news programs, “speculation doesn’t always pan out.” He also said that “after all of the importance and drama that danced on the head of the phone call pin, it would seem a correction or even an update would be a demand of journalism.”

He ended with, “Yet, given the chance to tell her viewers not only that Senate investigators have evidence it was not a call to his father, that major media were reporting this that very day, or even the names of the people who were actually called (itself an interesting Russian lead), Maddow instead chose to gloss over it and let Schiff continue to beat his well-worn drum. Even for an opinion show, that goes past shoddy and approaches deceptive.”