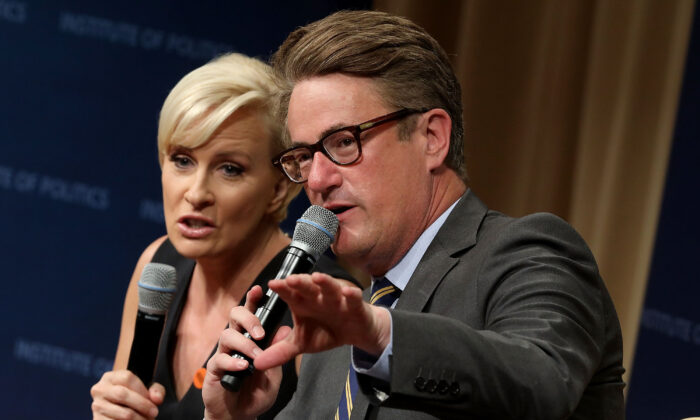 MSNBC’s “Morning Joe” finished the second week of November as the top cable news morning show for the first time since 2001, another mark of a slide by Fox News.

That’s the first time the former beat the latter in total viewers since 2001.

MSNBC trumpeted the situation in a press release, calling it a “Historic 1st.”

The network also noted that it topped Fox in each of the seven hours during daytime for the first time ever.

MSNBC averaged 1.6 million to Fox’s 1.5 million during that time—a jump of 30 percent from the week prior for MSNBC and a drop of 33 percent for Fox from the last week in October.

“Fox & Friends” maintains a lead in year-to-date ratings and in the month of November over “Morning Joe.”

Fox remained ahead in primetime and total day viewers, with “Hannity” and “Tucker Carlson Tonight” continuing to draw large numbers.

Fox drew nearly 3.5 million viewers on average during primetime shows between Nov. 9 and Nov. 15, compared to 2.3 million for CNN and 2.2 million for MSNBC.

Fox also topped ratings on Nov. 14, led by Jesse Watters and Jeanine Pirro’s shows, and on Nov. 16, led by Carlson’s 4.2 million viewers. He and Sean Hannity (3.6 million) were the top two highest-rated shows that night, followed by Fox’s “The Five” and MSNBC’s “The Rachel Maddow Show.”

A Fox spokeswoman didn’t respond to a request for comment.

Fox’s ratings slipped during election week when President Donald Trump and a number of conservatives grew upset over the network calling the state of Arizona for Democratic presidential nominee Joe Biden despite hundreds of thousands of votes left to count.

Biden ended up ahead after weeks of counting, but the margin was 0.3 percent and accusations of election fraud were made by Trump’s campaign.

Fox also claimed Democrats would extend their majority in the House of Representatives—the call was off by about a dozen seats—and the network cut off White House press secretary Kayleigh McEnany’s news conference about the election.

Carlson, the most popular cable news host, said on Nov. 16 that he wasn’t leaving Fox amid rumors he was going over to a competitor called Newsmax.

“This show isn’t going anywhere. It’s getting bigger. The people who run Fox News want more of it, not less, and we are grateful for that,” he said.