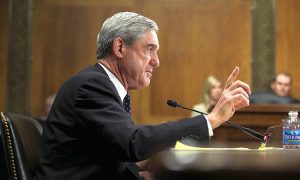 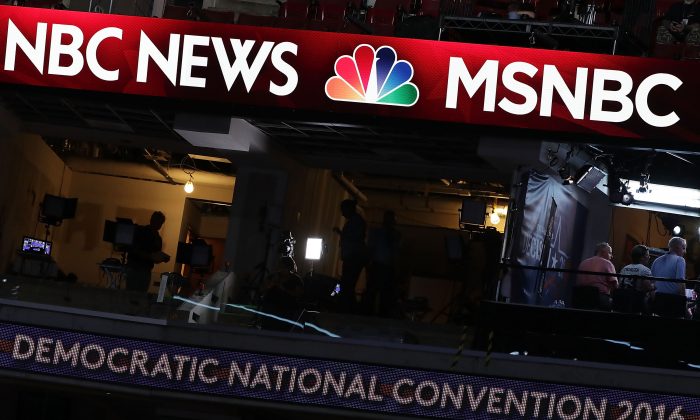 A booth of NBC News and MSNBC is seen at the Wells Fargo Center on July 24, 2016 in Philadelphia, Pennsylvania. Alex Wong/Getty Images
Viewpoints

It may be that the media and their political wing in Congress are preparing for the aftermath of a disappointing Mueller report.

If they were anticipating hot, spicy evidence of “Russian collusion,” why would House Intelligence Committee Chairman Adam Schiff (D-Calif.) promise to return to re-investigate “Russian collusion” at the infamous Trump Tower meeting?

Or take a recent narrative-setting session with MSNBC’s Katy Tur and MSNBC analyst Michael McFaul, the former ambassador to Russia credited with designing the Obama–Clinton “reset.” If they really thought the special counsel was about to nail President Donald Trump, why would they now be re-baiting some of the same old sorry traps?

Of course, it’s also possible they’re priming the public to accept the special counsel’s findings by re-enforcing a series of forgotten false narratives—big lies—which depend on constant repetition to achieve conventional wisdom status—the subject of my last column.

In that column, I addressed “The Big Lie About ‘Russian’ ‘Hacking'” at the Democratic National Committee (DNC)—an assertion, an attitude, a state of mind created without evidence, neither from the FBI, which never examined the DNC’s servers, nor from the special counsel’s indictments to date. Tur and McFaul just pretend such evidence exists, and McFaul even gives a shout-out to Mueller and the “intelligence community” for finding it.

The MSNBC session opens with the fantastical assertion that Trump wasn’t being a wise guy when, on July 27, 2016, he said during a press conference: “Russia, if you’re listening, I hope you’re able to find the 30,000 emails that are missing. I think you will probably be rewarded mightily by our press.”

No, this was high treason in prime time, Tur and McFaul maintain, and with fairly straight faces.

What, Tur asks McFaul, were the Russians thinking when Trump said that?

McFaul replies: “They were thinking that their work was helping Trump to win. WikiLeaks, their data dump, the conversation about the emails, and linking it to the 30,000 missing emails that President, then candidate, Trump did very deliberately—that was all part of a negative messaging against Secretary Clinton, and the Russians played the instrumental role in that. Without the Russians, that wouldn’t have happened. When they heard that, I think they’re thinking, ‘Oh, our strategy has been working here.’”

If McFaul was seriously trying to execute cable TV analysis, we might worry about the poor man’s mental faculties on reading his response. But agitprop is another matter.

Next, Tur flashes a quote on screen from the special counsel’s 2018 indictment of 12 Russian spies for spying. It states: “[O]n or about July 27, 2016, the Conspirators attempted after hours to spearphish for the first time email accounts at a domain hosted by a third party provider and used by Clinton’s personal office. At or around the same time, they also targeted 76 email addresses at the domain for the Clinton Campaign.”

McFaul says: “The evidence is just clear as day. I’m glad you reminded your viewers of that. I remember when I first saw those lines in the indictment, we all assumed that, but they have the evidence there. Incredible, by the way, that we have that intelligence, just to give credit to Mueller and our intelligence community.”

In fact, the evidence is anything but as “clear as day.” In a podcast, William Binney, a former technical director of the National Security Agency, explains why it is that the basis of this Mueller indictment of 12 Russians is based on “a fabrication.” As Binney puts it, “When you base an indictment that way, your whole indictment is a fabrication, too.”

McFaul continues: “But think about what we’re talking about here. The candidate, Trump, is asking a foreign government—by the way, an enemy government—to help him win the presidential election. And they not only were doing that—and I think played a very important role with the WikiLeaks data dump generally—but then even attempted to go farther when he publicly asked them to do so.”

Tur then turns to a Russia Today (RT) special on Julian Assange, which she says aired in August 2016. She mentions a couple of items from the special, which appear to be derived from WikiLeaks-published emails. “[The] U.S. government … did use Libya as a conduit to get arms to jihadists in Syria. They also talked about Hillary Clinton’s health,” she says, although we already knew the former from Benghazi hearings, and certainly, anyone with eyes could watch enough Clinton stumbles, collapses, and coughing fits to talk about her health without WikiLeaks.

Tur continues: “They mirrored a lot of what Donald Trump ended up talking about in the campaign when he started to go after Hillary Clinton.”

Count to 10 … so the WikiLeaks emails constituted—altogether now —”NEWS.”

WikiLeaks has published more than 1 million documents and never had to retract a single one, which is an unequaled record for accuracy. The bad, the ugly, the corrupt, the inane, the downright disturbing—all of it is the genuine article, and very much in the public interest to disseminate … oh, what’s the use?

McFaul says: “Exactly, exactly. … Their messaging was very consistent, echoing each other, and candidate Trump, and his Trump organization, and the presidential campaign with him were encouraging Americans to look at WikiLeaks.”
Imagine that.
Finally, the end is near. Tur says: “When you look at this all together. These emails get hacked. Trump calls for more emails to get hacked. RT is starting their propaganda campaign that mirrors WikiLeaks, which then mirrors what Trump is saying, and the head of the CIA is urgently calling top lawmakers, it seems like we really need to focus on that summer … and what exactly the campaign or the president knew then, and whether or not Russia was taking orders from him or vice versa.”

God save the Republic.

Diana West is an award-winning journalist and the author of two books, “American Betrayal: The Secret Assault on Our Nation’s Character” and “The Death of the Grown-Up: How America’s Arrested Development Is Bringing Down Western Civilization.”