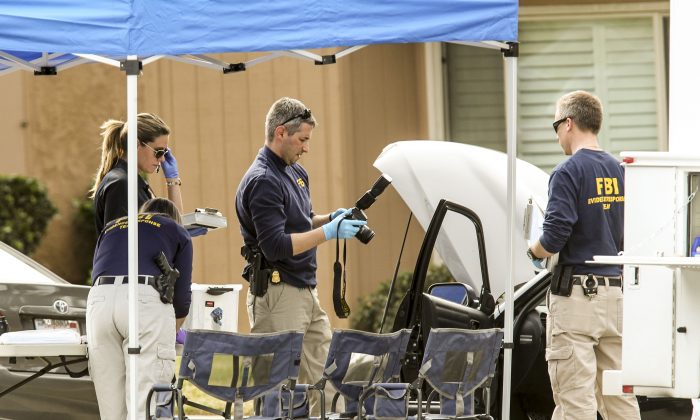 FBI agents investigate a car near a home in connection to the shootings in San Bernardino, Thursday, Dec. 3, 2015, in Redlands, Calif. (AP Photo/Ringo H.W. Chiu)
US

Throngs of reporters and cameramen entered the home of the mass shooting suspects Syed Farook and Tashfeen Malik on Friday afternoon after the property’s landlord apparently took off the board that was covering the door.

MSNBC and CNN reporters barged into the apartment of the couple, who are alleged to have shot and killed 14 people at a social services center in San Bernardino, California, earlier this week.

“Goodnight Stories from the Koran.” Dug up by MSNBC rummaging thru terrorists apt. pic.twitter.com/XwTmGQauhn

They caught the first images of Farook’s and Mailk’s home. They found their driver’s license, pictures, and several Korans and books on Islam.

However, the reporters drew criticism from many, who said they were tampering with police evidence. The Washington Post opined that the move was “slimy” and “awful” journalism.

good thing MSNBC didn’t broadcast this in a gun-filled country caught up in a frenzy of muslim bashing ht @istheguy pic.twitter.com/AeWiXnmKcM

The landlord of the building, Doyle Miller, was asked by journalists on the scene after he went there to assess damage done during the police search. He apparently allowed them inside after they asked, reported The New York Times.

“That just opened the flood,” Miller’s wife, Judy, told the newspaper on Friday.

She said they did not anticipate the chaos that would ensue. “It got way out of hand,” she said. Her husband added to CBS News that when he opened the door, “they rushed” inside.

David Bowdich, assistant director of the FBI’s office in Los Angeles, said later in a conference that reporters on the scene could enter the building. A search warrant was executed at the apartment. “Once the residents have the apartment and we’re not in it anymore, we don’t control it,” Bowdich said.

CNN’s law enforcement analyst, Harry Houck, said on the air that he got “chills” reporters and camera operators contaminate the home.

“I don’t see any fingerprint dust on the walls where they went in there and checked for fingerprints for other people that might have been connected with these two,” he said. “You’ve got documents laying all over the place; you’ve got shredded documents…You have passports, you’ve got drivers’ licenses — now you have thousands of fingerprints all over inside this crime scene.”

“I am so shocked, I cannot believe it,” Houck added.

CNN’s Andrea Mitchell, live on the air, added: “The landlord told us authorities were done with the crime scene.”

CNN and MSNBC issued statements on the matter. “Although MSNBC was not the first crew to enter the home, we did have the first live shots from inside. We regret that we briefly showed images of photographs and identification cards that should not have been aired without review,” read the statement from MSNBC, per Mashable.

Two Korans among the IDs on the bed. pic.twitter.com/liPtzXSJbf

“CNN, like many other news organizations, was granted access to the home by the landlord. We made a conscious editorial decision not to show close-up footage of any material that could be considered sensitive or identifiable, such as photos or ID cards,” a spokesperson with CNN added to the website.