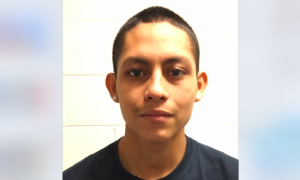 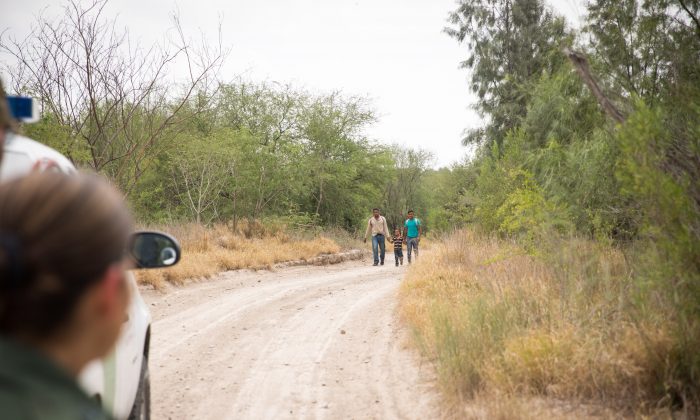 Two young men and a child approach a Border Patrol agent after crossing the Rio Grande from Mexico into the United States in Hidalgo County, Texas, on May 26, 2017. (Benjamin Chasteen/The Epoch Times)
Trump Administration

WASHINGTON—The resurgence of the MS-13 gang in the United States since 2012 can be attributed to a flood of illegal immigrants from Central America and lax immigration enforcement policies, according to a report published by Center for Immigration Studies on Feb. 21.

More than 300,000 Central American and Mexican youths and families have entered the United States illegally in the last three fiscal years, according to Customs and Border Protection statistics.

“The parts of the country that have experienced an increase in MS-13 activity correspond roughly to the areas where there have been the largest number of UAC resettlement placements by the federal government,” said report author Jessica Vaughan, director of policy studies for the Center for Immigration Studies.

UAC, or Unaccompanied Alien Children, is a term given to minors who cross the border illegally and are transferred to the Office of Refugee and Resettlement. Within a couple of months, these minors are released to a sponsor in the United States—often a family member who is already in the country illegally.

When MS-13 gang leadership decided to expand its presence in the United States, it was able to take advantage of the unaccompanied minor process to move in younger members from Central America, according to the report.

“For example, one MS-13 clique leader in Frederick, Md., who had received a DACA work permit and was employed as a custodian at a middle school in Frederick, Md., and who was recently incarcerated for various gang-related crimes, reportedly was told by gang leaders in El Salvador to take advantage of the lenient policies on UACs to bring in new recruits, knowing that they would be allowed to resettle in the area with few questions asked,” Vaughan said.

The center examined 506 alleged MS-13 gang member arrests since 2012 and found 207 of them were charged with murder. Other charges include conspiracy/racketeering, drug trafficking, sex trafficking, attempted murder, sexual assaults, and extortion.

While 299 of the 506 MS-13 suspects in the report had an unknown immigration status, 126 were confirmed to be illegal aliens and a further 74 were suspected to be illegal.

Of the 506 MS-13 suspects, 120 were unaccompanied minors, including 48 of the murder suspects, according to the report.

Many of the hotbeds of MS-13 activity are also places where local officials have adopted sanctuary policies, the report says. Almost half of the MS-13 arrests detailed in the report occurred in sanctuary jurisdictions.

“Sanctuary policies are destructive to local and federal efforts to combat gangs because they interfere with communication and cooperation that could lead to disruption and dismantling of gangs with large numbers of non-citizens,” the report says.

“Strategic use of immigration enforcement is a necessary element to disrupting and dismantling MS-13 gangs and any other transnational criminal organization operating in our communities.”

Gang arrests by Immigration and Customs Enforcement (ICE) dropped sharply during President Barack Obama’s second term, from about 4,600 in 2012 to about 1,580 in 2014, according to the report.

Those numbers shot back up during President Donald Trump’s first year, with 4,818 arrests in fiscal year 2017, including 796 MS-13 members and associates, according to numbers by ICE.

Vaughan makes several recommendations to combat MS-13 and other transnational gangs, including creating penalties for sanctuary jurisdictions. She also suggests that gang members be detained while being processed for deportation and gang membership be grounds for inadmissibility and removal.