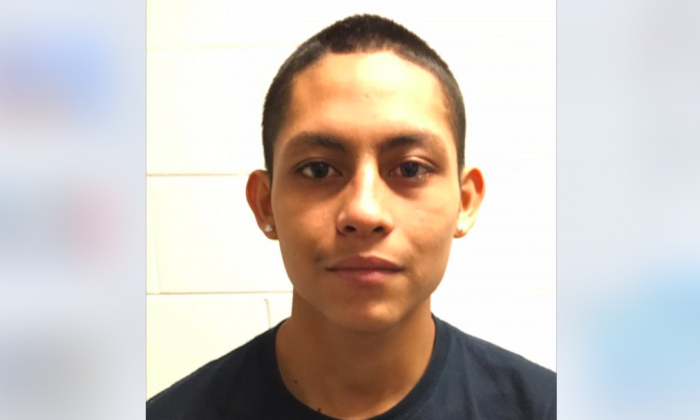 Known MS-13 gang member Miguel Angel Lopez-Abrego has been charged with first-degree murder in the brutal slaying of a man in Montgomery County, Md. (Montgomery County Police Department)
US News

A 19-year-old known MS-13 gang member has been charged with the gruesome murder of a man in Montgomery County, Maryland, according to court documents released Nov. 22.

Miguel Angel Lopez-Abrego, along with nine other MS-13 members, stabbed the victim more than 100 times, decapitated and dismembered him, and ripped his heart out before throwing him into a grave in Wheaton Regional Park, documents say.

Lopez-Abrego was identified by an informant, who is also an MS-13 gang member. The informant said he was part of the killing and led detectives to the gravesite on Sept. 5. The informant “further described the circumstances of the murder and detailed the choking, stabbing, decapitating, and dismembering of the victim’s body before dumping it in the pre-dug hole,” according to the court document.

“The body was exhumed and the condition of the victim’s remains were consistent with the injuries [the informant] said were inflicted upon him.”

The informant told police that Lopez-Abrego helped dig the grave, waited for the victim’s arrival, and was the first to stab the victim “when he thrust a 15-inch knife through the victim’s chest.”

The victim’s identity has not yet been conclusively established. The victim has been described by police as a Hispanic male, approximately 5-foot-2 and weighing 126 pounds. He has short, dark brown hair. The victim was wearing a men’s size large, gray sweatshirt, with the words, “First United Methodist Church Laurel” written on the left chest and black sweatpants, under which he had blue, athletic shorts with the number “19” on the left side and a stripe on the right leg.

The informant said the killing took place in early spring and the gang members had planned it for a couple of weeks prior. They lured the victim from the Annapolis area with the purpose of killing him and disposing of his body in the wooded area of the park.

Law enforcement had lost track of Lopez-Abrego from September through November when they found him in North Carolina on Nov. 4, along with two other MS-13 gang members who were wanted for unrelated first-degree murder arrest warrants in the D.C. metropolis area. Lopez-Abrego was extradited to Maryland.

The Trump administration has vowed to eliminate MS-13, which has gripped communities in places like Montgomery County with its brutal crimes.

Tom Homan, the nominated director for Immigration and Customs Enforcement (ICE) said the agency is going after MS-13 because they are so vicious.

“MS-13 terrorizes communities through violent crime and extortion in furtherance of its mission to rape, control, and kill,” Homan said on Nov 16, while announcing the arrest of 214 MS-13 gang members in the United States.

Of those, five members of MS-13’s Sailor’s Clique in Maryland who were arrested are alleged to have participated in three murders and had planned a fourth, between July 2016 and June 2017.

“The violence they perpetrate is shocking and shows no remorse or even a basic respect for human life,” Homan said.

Homan said of the 214 MS-13 gang members arrested recently, 193 were in the United States illegally. Sixty-four of them were on the unaccompanied minor program.

“These same gang members are taking advantage of immigrant communities in which they live—committing acts of horrendous violence against its residents, attracting violence from rival gangs, extorting small businesses, peddling street-level narcotics, and co-opting the youth and recruiting them into this gang,” he said. “We will not be done until we totally dismantle this organization.”